"Energy Density" - Not a single topic on any one of the other Forums, except Above-Unity Member Forums, at all!

Electric energy density is the amount of energy stored in a given system or region of space per unit volume or mass, though the latter is more accurately termed specific energy. “V” is the volume of the system you are working with.

Yet, as you may be able to see, one of the most important topics of all!

So lets get the Brains of Readers going: Energy Density

Electric and magnetic fields store energy. In a vacuum, the (volumetric) energy density is given by

where E is the electric field and B is the magnetic field. The solution will be (in SI units) in Joules per cubic metre. In the context of magnetohydrodynamics, the physics of conductive fluids, the magnetic energy density behaves like an additional pressure that adds to the gas pressure of a plasma.

In normal (linear and nondispersive) substances, the energy density (in SI units) is

where D is the electric displacement field and H is the magnetizing field.

In the case of absence of magnetic fields, by exploiting Fröhlich's relationships it is also possible to extend these equations to anisotropic and nonlinear dielectrics, as well as to calculate the correlated Helmholtz free energy and entropy densities.

When a pulsed laser impacts a surface, the radiant exposure, i.e. the energy deposited per unit of surface, may be called energy density or fluence.

Some might say: "Ah, this is not important, what do we need to start thinking about this?", well, its not hard to see, as stated, the Magnetic Field, B, Stores Energy! We use Magnetic Fields, plural, to "Generate" Energy!

The rate of flow of energy through a surface can be calculated as a function of E and H. Specifically this flow is equivalent to E.H per unit area.

This energy flows at the speed of light through a medium where c = 1/√με . E and H are in quadrature and are normal to the direction of the energy flow. The energy density is therefore: E.H / c.

If two signals of equal magnitude (assume & ) are travelling through each other in opposite directions the energy density is calculated as follows:

If the directions of the two signals are such that opposite H-fields cancel and E-fields add, an apparently steady E-field will be created. The energy density of the fields remain as calculated above, but the value of the E-field will double from E/2 to E.

It is a simple matter using the equations E/H = √με and c = 1/√με for a team wave to get rid of H and c and so convert the first equation into the well known equation for energy density in the so-called electrostatic field:

It is time we push the Ignorant Boundaries that have been enforced by others out there trying to steer this field of research for so long, and leave them behind, for the Flies!

The Magnetic Field should be thought, not as an Energy Storage mechanism, but an Energy Source:

Why the field of a magnet is not the property of the magnet: First the electromagnet – it takes power from a source to initiate and bring to steady state the field of the magnet. Once the field is stabilised and the exciting  current is no longer changing, no further power is needed from the source. The only power required is that needed to support the I2R losses due to the ohmic resistance of the conductor comprising the coil of the magnet. This loss appears as heat.

As stated, the only power is that supporting the I2R losses. Then the field due to the moving charges is not a property of the current drawn from the source but a property of incoherent energy quanta in the surrounding space interacting coherently with fields produced by moving charges on the electrons in motion through the coil.

You see how badly some people have thought about the Magnetic Field, this has been for decades! Dogma!

Science will tell you, the Magnetic Field can NOT do Work, this is also not true: 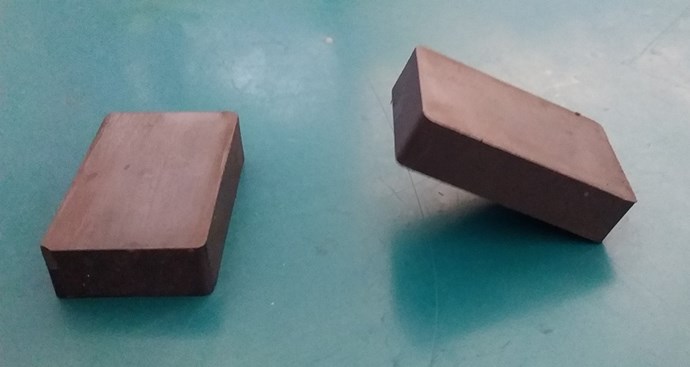 Yup, Work, free, with no Input to the System other than me placing the Magnets!

The definitions / meanings in Science can sometimes be very crude or non-explicit, Dogma! Scientists, most, are very Un-Scientific, they have no Exploration in their veins, which is the entire definition of Science, to study and understand Nature through the Exploration of Mother Nature herself!

But, if the Magnetic Field is NOT Moving, this is not the case, the dependent aspect if Movement. This is the exact same fundamental process as a Change in Current: di/dt. Simple and very easy to understand here, nothing hard about this!

Magnetic Flux, Gauss or Tesla, which ever Unit you choose to use, is equivalent to Amperes per Meter! ( A/m )

Gauss is directly convertible to Amperes per Meter!

So, if we have a Loop of Wire, we can have an Energy Density of 79.77 Amperes if the Loop of Wire has an Area of One Square Meter that is exposed to One Gauss. This is Energy Density, this image may help some: 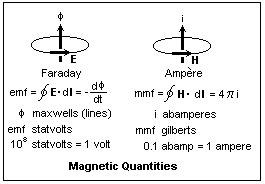 All here should know, M.M.F or Magnetomotive Force is Current I through Turns N, or NI, which is Ampere Turns.

So, all minds that are clued into the simple aspects of Nature, in other words Real Science, now may have a clearer insight to Energy Density, and why Magnetic Fields are an Important path in Understanding Why Electrical Energy, the power of an atom's charged particles have to cause an action or do work, to make Electrons Move, we need to put them under Pressure, in other words, Bucking Magnetic Fields, and as Floyd Sweet told us:

The current and voltage initiating fields are in such a direction to either accelerate or decelerate the rate of flow of charges depending on the applied polarity and voltage amplitudes.

As polarity may be maintained constant, that polarity of acceleration should be chosen so charges move at faster rates, lowering copper duty factor, at the same time opening the gates wider so more coherent field entities may enter for the conversion process.

It’s obvious, we have a self-regulation machine whose inherent conservation to the nth degree.

Charges from the Copper Atom, which are Free Electrons! Simple isn't it!

If the directions of the two signals are such that opposite H-fields cancel and E-fields add, an apparently steady E-field will be created. The energy density of the fields remain as calculated above, but the value of the E-field will double from E/2 to E.

exactly what we can see when using opposing coils.

An electrostatic potential can do work - like an oldskool tv attracting dust, or a glass rod attracting water from the faucet, for free. Now we want to make copper charges move similarly, for free, using only the E field in the circuit.

I am not sure I would describe it this way...

I would describe it more like a Hydraulic Ram Pump:

Where work done is a result of an Action, and we can have a Reaction, but this very same Reaction can, Science totally misses this, have a Counter-Reaction. This is Asymmetry and most of this is missed entirely in Science! Convientently!

Science is keeping simple things like this behind closed doors, away from the People, Shamefully!

It's a good description in a few words

If I can add something about the energy density there is also the current density which is expressed in amperes per square meter it is a vector represented by the lowercase letter j and it is not often seen in formulas.

I have never heard of the ram pump, it is really an ingenious invention . I think (imho) it is comparable to a self-oscillating DC flyback

DC potential is the constant pressure in a water reservoir, DC flows, is cut off, causes a pulse in the hose that is strong enough to push water through the valve uphill. Thanks for sharing. If L2/L3 is not seen by L1 because L2/L3/diodes combine as non-inductive, then all energy is used by L1 self-inductance. To the flux L2/L3 are an inductor still. they are excited from within into an EMF source, and after the pulse with a load, Lenz is used to sustain the source comparable to internal current of a battery, instead of fighting L1.

How do the dots relate to each other? there are 3 couplings and 3 mutual inductances.

Do L2/L3 conduct during Ton? And during Toff they power each other in the same current direction? What happens during Ton>Toff edge? 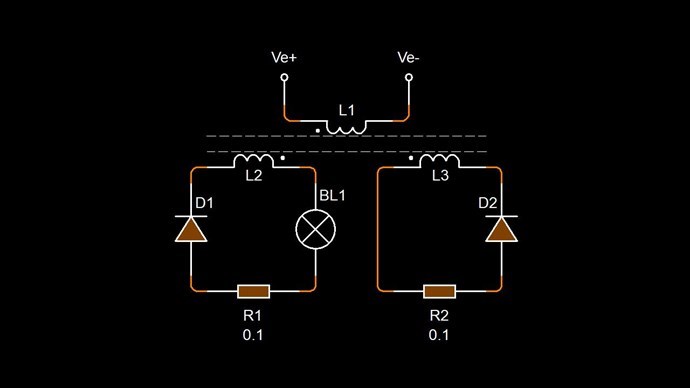 Or to save you time, which video do I need to study?

The Pages on this forum contain all the answers you are looking for!

We have put together a guide: Builders Guide to Aboveunity Machines Thats the big flashing link on the Home Page

Many here have succeeded, and this thread is really going Off Topic, so I ask please create your own thread, share your experiments and we will help you Succeed also.

First, please go and read the thread I posted.