In the spirit of aboveunity.com

SUMMARY OF THE INVENTION

Problems to be Solved by the Invention

0010. The object of the present invention is to provide a transformer capable of outputting more efficiently than conventional transformers the electric power appearing in a secondary output in response to a primary input.

0012. Further, just after the power supply to the above primary coil is switched from OFF to ON or ON to OFF, the electric power generated in the above secondary coil is taken outside of the transformer.

Advantage of the Invention

Abstract from this paper

Abstract
In a series of papers Osamu Ide has experimentally shown that by
applying an electric pulse on a transformer, a current appears that does
not have a counterpart in classical electrodynamics. This behaviour has
been verified by own experiments. There is a short pulse of about 2 µs
and an onset of current, which is significantly larger than the current to
be expected from the circuit according to ordinary circuit theory. This
non-classical behaviour can be explained by a model based on EinsteinCartan-Evans (ECE) theory which incorporates elements of general relativity. From this model, a differential equation for the vector potential
emerges which depends on the so-called spin connection, a phenomenon of spacetime structure. By using a parametrized model for the spin connection, the experimental curves for the on-set of current can be explained very well. This might be a mechanism of energy transfer from the nonempty vacuum

Abstract from this paper

Abstract
A special parametric oscillator is designed utilizing the Ide effect (additional current at hard switch-on of a transformer). According to preceding papers, this current is a consequence of an oscillation of inductance before it reaches its static value. The oscillation is utilized as a parameter change in a serial or parallel oscillator circuit. Simulation results show an exponential growth of the current even in presence of an ohmic resistance. Concerning the energy balance, the output energy highly exceeds the input energy taken from the power source. Modifications of the circuit are investigated which avoid short cuts during switching of the power source. An inductive coupling of input is of limited useability, except the capacitor is moved to the primary side of the circuit. Experimental tests should be executed to prove the concept being well engineerable. 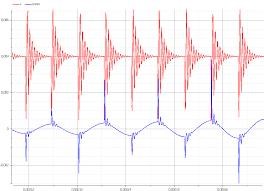 Figure 3: Variable inductance L and current I in an enlarged time slot.

look at the black large wire at the center coil of the VTA, it runs the whole width of the coil in one pass. From bottom left to top right, the opposing coil (not visible on the picture) would be on the opposite side going from top left to bottom right. And im guessing the large silver colored plate in is an impedance matching network (like RF balun transformers) or an aluminum cooling plate for the water circulated primary tube coil(similar to an induction heater coil) .

Another remark about this black wire/tube is its sligthly deformed look 1) sweet tried differrent configurations and bent it back and forth many times 2) or he coated the outside of it with ferrite epoxy 3) or he made the piece himself with his own material mix ( degenerate conductor tom bearden mentioned) just guesses.

here's why half turn is efficient. 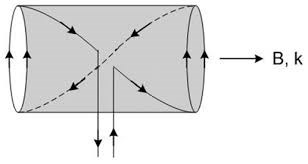 turn this picture sideways and put it in the vta. the arrows point the direction of current flow at each pulse. the short coil insures efficient opposing currents distribution at each period of the cycle.

Plasma densities produced by half- and full-wavelength helical antennas in helicon discharges are compared. Contrary to theoretical expectations, half-wavelength antennas are more efficient than full-wavelength ones in producing plasma downstream