Hello mates.
How is it going?
Now....As reading the forum my understanding grows...but also the number of questions I have.
I love the Original Bucking coil Picture that Chris has,and all others...however...we see 1 single winding.
In the quest to build a ,as perfect as it gets coil....one must understand how multiple winding with different current flow affects the magnetic field. 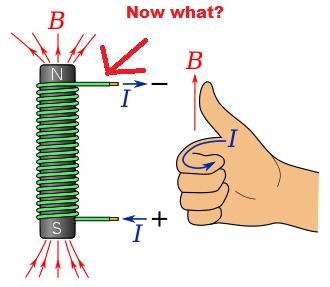 As you see in this picture,another 1 wrap coil...the direction of current is simple,and so we can see that we have a north and a South pole.
BUT ,
As we do not have any more space on the core,as we try to make the magnetic field denser, we must wind the coil in the opposite direction...from TOP to BOTTOM.
In this situation as CURRENT direction changes from BOTTOM- TOP to TOP-BOTTOM ( in the second round  wrap )...we will have a change in the magnetic field polarity.

I am sure for many of you guys this may be a silly question,but how should we wind our coil so that when we do not have any copper wire in the hand....at the END Game...the COIL as a whole can have 1 N and 1 S ?

Thank you very much and keep up the good work. !
Much Love.
@drago

Hey Drago, I understand what you are pointing out. It is not the magnetic polarity that changes in this case, but you will have one layer in clockwise sense, and the next counter clockwise. N-S polarity will remain the same according the right hand grip rule, but it might change some properties related to the A vector field. Another winding pattern is from bottom to top and then take the wire straight down again and make other layer to the top, so you will sustain an unique curl. Regards Vidura.

In any Symmetrical System, there is always Action, Reaction pairs! They are always equal in Magnitude, and Opposite in Direction.

The best way to learn is on the bench! A simple experiment can very easily probe this on the bench. Wind your Coils, load the secondary and test as you have described.

You will find, the Secondary will Oppose, in both Magnetic Field, and Current Direction, the Primary.

Winding Direction can make a difference to performance. I have shown this here: Some Coils Buck and some Coils DONT

An Asymmetrical System will behave quite different, if you let it.

Experiment is key to understanding rational machine and this is a simple one to experiment with. Prove to yourself what occurs!  Please post your results.

P.S: The Right Hand Grip Rule is important to know about and understand, it does give Current and Magnetic Field Polarity! See Floyd Sweet's Nothing is something for Reference:

Consider for a moment the construction of the triode which includes the bifilar coils located within the fields of the two conditioned magnets.

When the current in one half of the conductors in the coils (i.e., one of the bifilar elements in each coil) of the device is moving up, both the current and the magnetic field follow the right-hand rule.

The resultant motional E-field would be vertical to both and inwardly directed.

At the same time the current in the other half of the conductors in the coils is moving down and both the current and magnetic field follow the right-hand rule.

The resulting motional E-field is again vertical to both and inwardly directed.

Thus, the resultant field intensity is double the intensity attributable to either one of the set of coil conductors taken singularly.

Seems like a good spot for this question. On one side of my core L1 and L2 are wound CW. When i feed signal into L1(so N pole is up), and connect probe on same end of L2(so N pole should point down, i get L1 and L2 in phase, if i reverse L2(so N points up) then my scope shows L2 current 180°out of phase with L1. I think this has been slowing me dowm for a while. When i do same test with L2(cw) and L3(ccw) they are 180°out of phase as they should be. Any reason im not seeing same interactions between L1 and L2?

Hello AlteredUnity.
This is a very good question.Thank you for posting.

When we introduce in a circuit an inductive component , current and voltage do not cross the 0 barrier and Max amplitude barrier in the same time.
We use terms  as "Voltage is LEADING or LAGGING Current "

If you probed with your scope the coils , what you see on the screen is the Voltage.
One side of the coil is + and one side is -.

The current in L1 (If changing ) , will induce a Current in L2 that will create a magnetic field , to oppose this Change. ( Lenz Law )

Your Coil L2 does not like what L1 is doing , and it tries to oppose its Actions. Current 180 out of Phase.

Because the ASYMMETRY that Chris has introduces in the FE communities , LENZ law is not our enemy any more but our friend.

You have a Closed Core , and the magnetic flux can flow to the left or to the Right.There are no other ways.

In your Case with 2 CW coils L1 and L2 on the same leg (Left leg ) of your transformer ,you will have the following situation.


Using the right hand rule , your L1 Trigger will have S pole up and N pole down.

The S pole is  the place where current is entering the system ( DC power supply ) and the N pole is the end that is connected to the drain of your N Mosfet.

Your L2 will have N pole up and S pole down. (Complete opposite of L1 )

Your L2 coil decided of his own free will that this is the only way "he" can meet and counter the L1 flux  in the closed loop Core.

It is true that you can change the flow of current with a Diode , however you must let Lenz Law to do it's job and not try to counter it with the diode.

My advice to you , is to disconnect l3 Coil and play a little bit with the Transformer mode L1 and L2.
If you put 1 W in the circuit , does the Resistive load on L2 produces like 0.8 w of energy ?

You do not have to measure it , just take a look at it.

If you place 1 w in your circuit and your 1 w Bulb is barely lighting...than you have a loss somewhere, and until this situation is fixed , you can place multiple L3 in the setup...it will not work.

Sometimes the human mind complicates things a lot,do not worry about it.

I find the , method that @Fighter used in his thread "Romanin ZPM " very very good  and that is Compass testing.

You Connect 2 Coils in series and using a compass you can check if the Upper polarity is the same.

If the coils have N-N polarity UP they will attract the S side of the Compass. Remember N attracts S.

You do not have any problem AlteredUnity , I find myself many many times in this situation .
The mid is complicating thing a lot.

I am not an expert and I do not have a working device , but I learn as much as I can and perhaps someday I will get to that point.

Please remember what @Chris has said in his videos.

" The first time is hard , but once you achieve the goal , than you will not have any problem building it whenever you want "

Take care AlteredUnity , and never give up!

Melendor has it exactly Correct!

Think "Generator", what does a "Generator" do? What are its Processes to light your Lights?

A Voltage is "Generated"  Right?

All answers are here on this Forum.