Some have spent 50+ years searching! We have what they could not find!

Some have Degrees, BA's, Ph.D.'s, all sorts of Education under their belt! Education, does not, by any means, mean: Smart!

Why have we succeeded, very simple, we have Open Minds, we have not aloud our minds to be clouded with Assumptions, or Postulates! We have found several simple things to be incomplete in Science, that they, their Exploration, failed to Find!

Their Symmetrical Mind Set has let them down!

You are all familiar with the following Circuit: 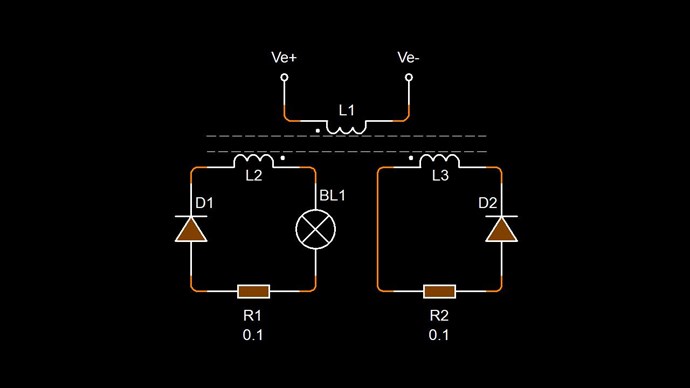 Well, we can do better! There is more!

Nikola Tesla gave us a phenomena of great importance when he filed Patent: No# 512,340 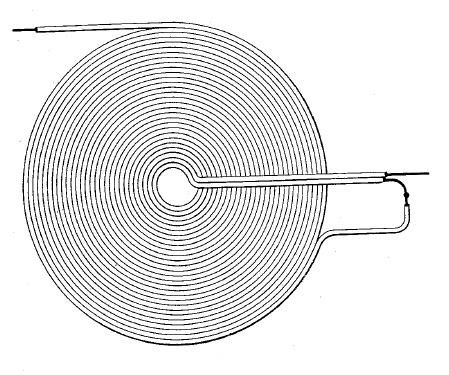 The Coefficient of Coupling of Coils / Inductors ( K ) is a unique variable. If the Factor is equal to 1, then the Coupling is considered Unity Coupling. Normally, Unity Coupling is where one Inductor is on top, directly, of the other. In other words, no Space is separating the Inductors/Coils.

Here is one way to Visualise this: 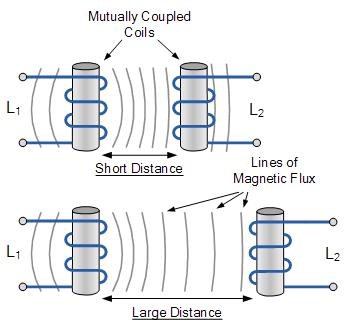 Here, a Transformer with Unity Coupling: 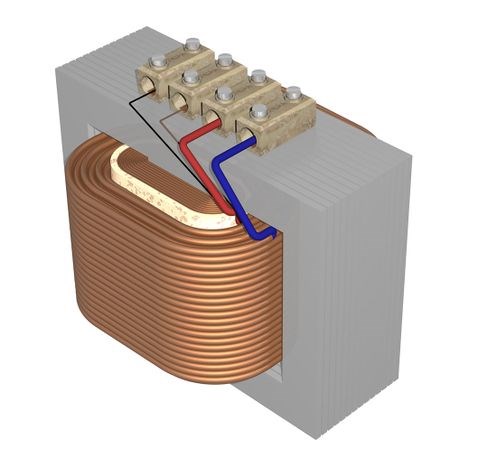 Both input and output Coils are considered Unity Coupled, Inner Coil is the Primary and Outer Coil is normally the Secondary.

Basically, Electromagnetic induction is better, the closer you have the Coils to the Source Changing Magnetic Field!

NOTE: The Natural state of two Parallel Wires, if Current Flows, is in Opposite Directions! I have stated this Here. NOT in the Same Direction: 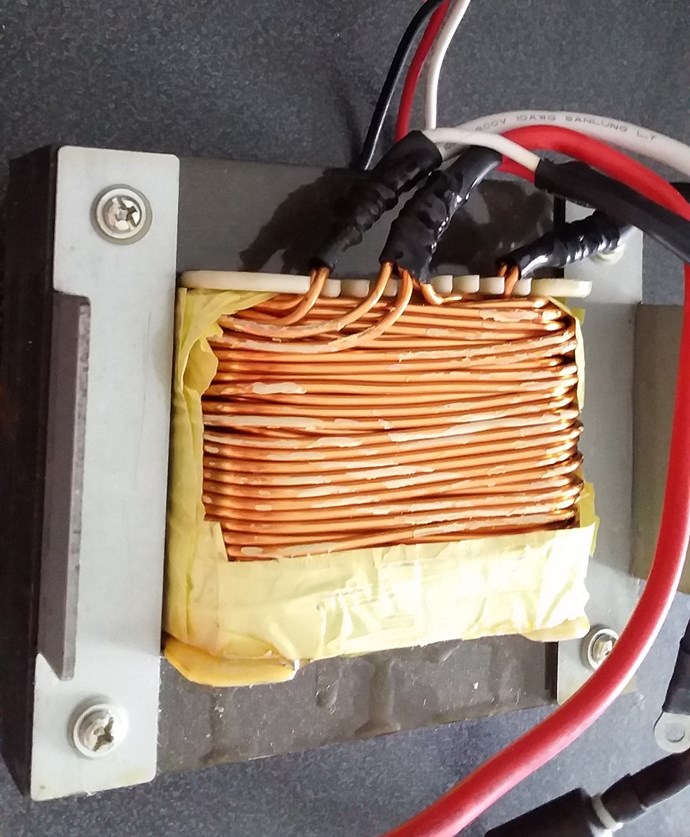 Most all of us here, already know this stuff, all have either learnt this prior to becoming a member, or from prior posts on this Forum.

In Practice, if we use what we have learned already, we can, in point of fact, use this knowledge, to gain an advantage.

What I claim as my invention is—

I propose the opposite, to Maximise the Self Induction.

My Friends, a recap for you:

We can have a Bi-polar Version: 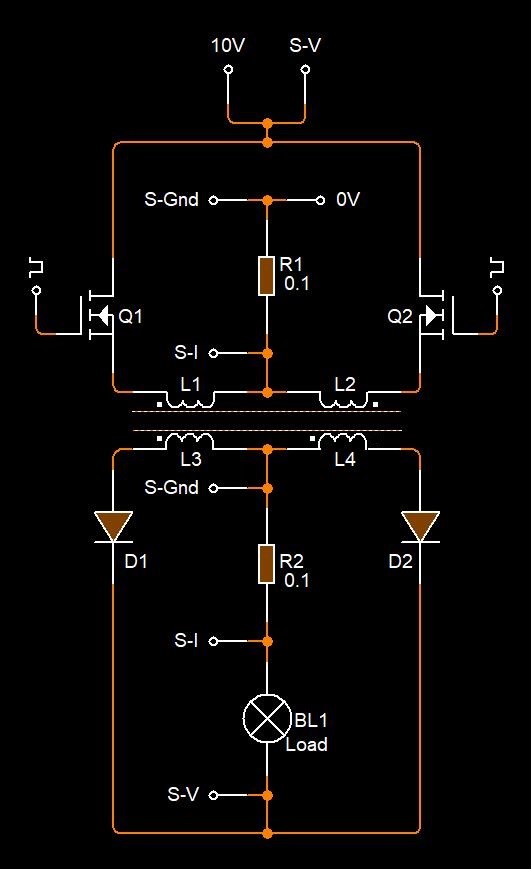 The Bi-Polar Version is a bit more difficult to use, and operate! The DC Pulses must be set, both Frequency and in Duty Cycle spot on to make this work efficiently.

NOTE: A Capacitor on the Output, is a good idea! The Capacitor will make for easier Measurement and also Spike Smoothing. Helping to protect your Scope and Equipment!

This probably should be a requirement at this stage! 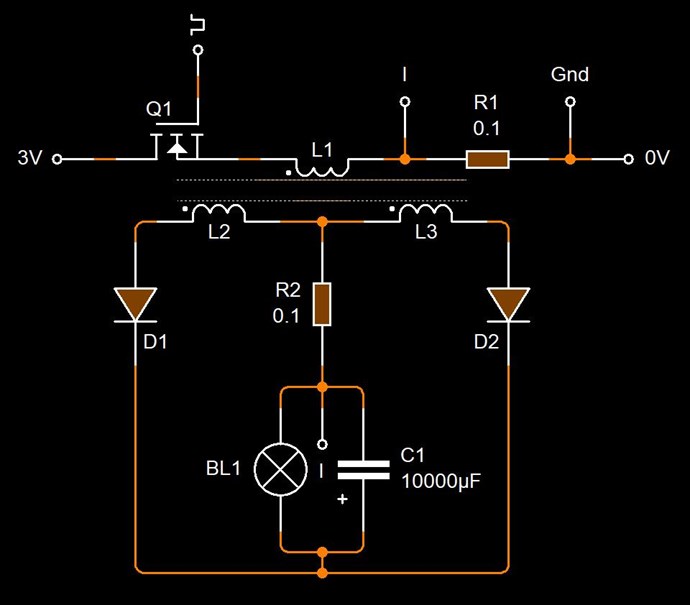 NOTE: C1 the 10,000.00 uF Capacitor. This will absorb the Spikes and Smooth the Voltage and Current Spikes we saw in earlier experiments. I know most here know this already, but for those that don't.

NOTE: I urge all here, a refresher on: Reduced Impedance Effect. This is an Important Effect!

I present a small demonstration, designed to show Effects Only:

I have decided to put this Video into a Series of Videos, here is Part One:

Remember, Current I = Voltage V / Resistance R, so if Voltage V increases, Current I must also Increase! Ohms Law is our Friend!

This original thread can be viewed here: https://www.aboveunity.com/thread/one-step-ahead/ which will be modified later on.

I think many do not take this subject seriously enough, then, some want to take all the credit, reposting almost exactly the content here I have posted already on this forum, some are just foolish, then, there is a small group that does take this serious, takes the time to learn and then, Success they achieve. Will Humanity become a Race that has faded out and is known as the Fools of the Solar System? Or will Humanity finally get their Brains in the Game and start Evolving, showing what we are really able to achieve?

Energy is Pumped from Source and Source is the Atom, the Copper (Cu) Atom having 29 Electrons each. 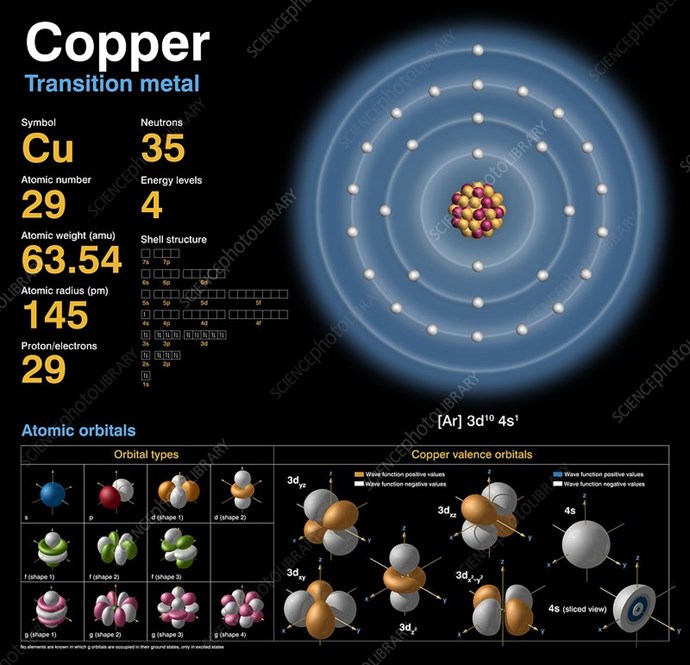 Already explained in Great Detail in the Thread: Electrical Energy

Most EE's do not even know where Energy comes from, I have explained this, shown where and how!

My Friends, the Pump is Bucking Coils, or Partnered Output Coils. Very Simple, very easy! Pointed out in the Thread: Timing, we looked at the Common Mode Choke and saw how it worked to smooth out Spikes and Noise on the line. Simply, one could say:

"Voltage is Un-Generated by the Common Mode Choke"

The Fact is, many EE's simply do not understand how this simple, yet ingenious device works! We know from experience, Voltage is also "Un-Generated" by Bucking Coils! This has been one of the main problems people have faced in the past, when experimenting on these Coils, known as Non-Inductive Coils! I have shown you TWO Methods to get around this issue!

There is a Relationship in Coils, a Wave Mechanics Relationship, which we have tried to gain a better understanding of in our Hidden, Non-Public Threads.

Wave Mechanics, the Analogy, using Antenna Theory or Magnetic Resonance, has been pointed out many many times here on this forum, also for a very long time! Few have used these analogies to make progress, but some have! And Progress some have made!

There are many people, that have never had any idea, claiming to have all the answers, taking all the information I have shared, and claiming it all as their own! Many people are simply just Leaches! Parasites! There is no reasoning with these people! There is no Conscience, no Morals, no Dignity! No Integrity, these people are just Parasites!

I admit I am not the first! But I am the First to give publically all the answers required to build these machines! None before me has done anything even close!

I have more videos coming, I see a great deal of people deserve more information, I hope you can see why I have done this slowly, in parts, all Date Stamped, showing the truth! Showing how I have given the Community, given Humanity the Right and Correct Path Forward! Independent Replication proves to any Sane Mind that these statement's are True!

Before me, the best these people could achieve was:

Today, the Oscilloscope is routinely showing Results, Results gained using world class Measurement Standards, none had ever achieved in the Public Domain before:

One of many replications! Easily, and Cheaply achievable with just a little understanding! Understanding I have provided to those Willing to Learn! 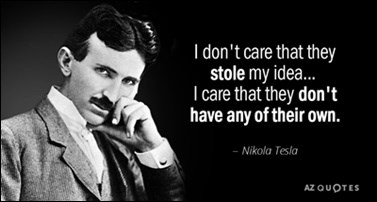 Nikola Tesla did care, thus the statement! History seems very reluctant to reflect truth and instead, it seems to favor the Parasites! Part of this story that I wish was more favorable:

Many methods exist, many configurations, to achieve Above Unity! But one thing is common, Bucking Coils! Coils that Buck, or Partnered Output Coils:

An Energy Machine Technology I introduced January 16, 2015 to the Public!

Do you see where this is going?

It turns out, Pumping Electromagnetic Charge Carriers is very easy! We have done this and you have all the answers you need, right here!

I agree with what you are saying here EMJunkie

Before 2015 and even a little before everything that we heard on the forums of the time was based on what John Bedini, Floyd Sweet and Tom Beaden were doing.
Since that time partherened output coils that you initiated have appeared on the net and today the result is there and you initiated all this.
thank you Chris Sykes for the immense work you have done, you see this forum is going very very well.

If I made progress today in my research it is thanks to you.

Thank You My Friend, but it is not me, its you! All the people that are trying to move forward and learn how to build these machines! It is all of you that is making this happen!

Over the years, there has been thousands of inventors that have built machines, the evidence is undeniable! However, none have shared, not even Floyd Sweet! Floyd did not show a single exposed Coil! Everything was hidden away, mostly Taped up or in a box, nothing shown and many false stories told!

We have gotten to the bottom of the False Stories and we have found some of the Secrets they held close!

Today, Humanity stands a chance, if it takes up this opportunity, then we will have a future! Without Energy, Humanity cannot Evolve!

Melendor posted this 2 weeks ago

Over the years, there has been thousands of inventors that have built machines, the evidence is undeniable! However, none have shared, not even Floyd Sweet! Floyd did not show a single exposed Coil! Everything was hidden away, mostly Taped up or in a box, nothing shown and many false stories told!

First off, I want to say a big THANK YOU to Chris , for all that hard work , all that investigation and pieces of the puzzle that he has managed to put together over the years.
I personally would not in 1000 years have managed that , because the inventors have hidden a lot of information and finding the pieces of the puzzle inside all that  deception is very very hard if not Impossible.

Also I am aware that many of you are doing work on other " parts / sections " of the forum , +  you have a life outside in the real world , and still manage to post on Public now and then , to help us , the people that are not still so advanced.
For this reason only..big THANK YOU to you all also !!!

We can not repeat the mistakes that all the inventors before us made...else...we are not better than them.

I wish you lovely people all the best , stay healthy and safe and hope that this will work for all of us in the end !!!

Thank You My Friend!

Achieve these two things, then one has achieved what they actively try to hide from all of the Human Race! Answers they have had for many Decades and have Hidden!

Delta B in Partnered Output Coils is a fundamental aspect to Energy "Generation", as B Changes, thus the Charges are Pumped!

All answers are here on this Forum! Those willing only need to learn the basic fundamental aspects, and then do the Experiment to Verify the Facts!

Very little time is left, I have just used this quote else where: 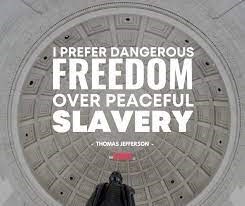 Truth is, EE's, or Engineers in general, have no idea, get totally lost, because this is not Electric, its Magnetic, its a Magnetic Effects that must be achieved! This is why the smartest EE on the planet can not make this work!