I think this machine of "A Valon" needs to be covered. A Valon was a member of ou.com and went under the name: "Avalon", of course. He went quiet and has been quiet as far as I know from the old days when he started posting these videos. He helped in the effort to replicate Akula0083 circuits. You will see the similarities!

OK, here is the result of my playing with the device and the house meter.
My house  is connected to the utility through a digital smart meter. My meter looks like the picture attached to this post except that it is made by Landis & Gyr.

I do not know how old the meter is (it looks relatively new) but should've worked just fine, all considering. However, it has the same design fault as my dumb Kill-A-Watt device. Under certain conditions it does not work properly.
Yes, there is still power consumption but the meter doesn't want to know about it.

My next (and rather obvious move) was to go to a friend's house where the meter is still an old winding type. No pleasant surprises there. It shows some power consumption the moment my device is plugged in.
We also tried a different digital meter (GE, bi-directional) which worked just fine and showed true consumption.

After some digging I found this video:

shows the tear down of a smart meter. After watching the video and some additional experimenting I think I know the answer.

So, is my device consuming power? Sadly, yes. It does.
The smart meter doesn't register the consumption because it senses the current on the hot sides only. My device, however, once tuned to the resonance frequency of the transformer, draws the power on the ground side hence bypassing the sensor.
That bypassing is possible due to yet another side effect which I am not going to discuss in details as it will lead to replications of this cheating device.

(If you are unfamiliar with the US power distribution, 2 hot sides (220V AC 60HZ)are coming down from the pole. Next the hot sides are distributed evenly to level-out the load bringing 120V AC to end consumer.)
I am not going into the details of the ferroresonance phenomenon here, as I am sure you've tried  it. If not, here is a good read:

Next obvious step was to try and change the resonant frequency and see what happens. Sure enough getting away from the critical point brought back proper meter functioning. Kill-A-Watt, however, remained dumb no matter what I tried.
BTW, my playing with resonant frequencies resulted to two additional events: 1/ I burnt down the transformer by accidentally disconnecting one of the secondaries 2/ I had to make another transformer in order to continue my experiments.

So, sleep well tonight. OU is still not here.

Zanzal has shared this with us before. YoElMiCrO has commented on this before also. Commenting:

I thank you for this topic here it is the real key to UA.

I believe YoElMiCrO meant AU, Above Unity and the UA was a possible typo?

In the first video, we saw a Circuit, a bit hard to follow, but this Circuit was shown to self run: 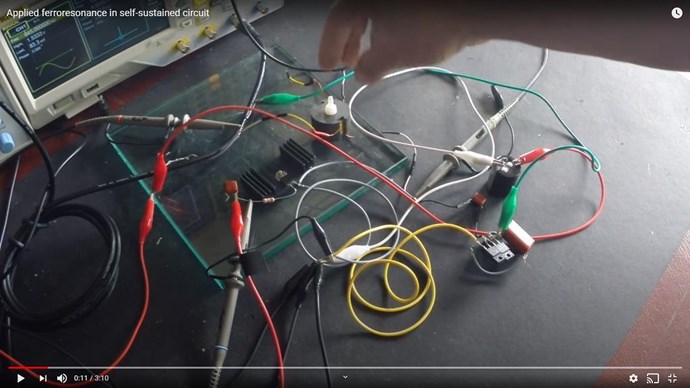 I have tried, it is a bit hard as its not clear, but tried to draw the Circuit out: 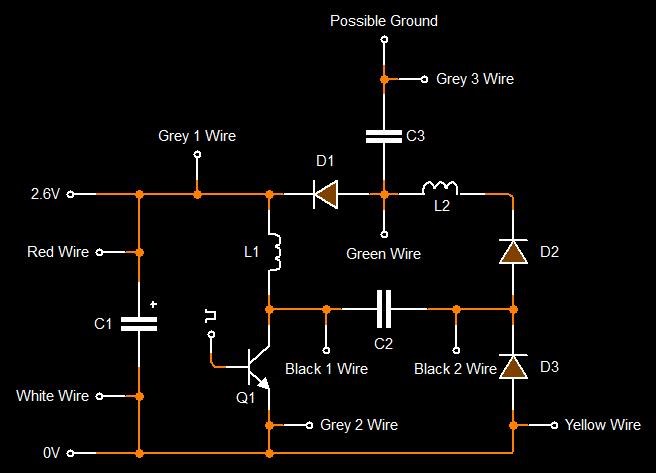 D3 to me makes no sense, but from what I can see, this is how it is drawn? Please if you see a mistake or something that needs to be fixed, please let me know! 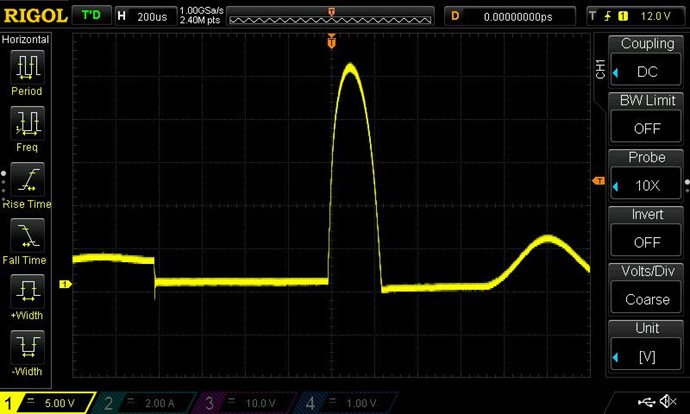 Now, I cant help but think this experiment I have done, in replication of YoElMiCrO's Circuit Here, shown again above, shows an RLC Time Constant in the RLC Network, but I may be wrong?

I was not going to cover this, but some recent findings have led me to believe there is more here than I had previously thought.

C2/D3 is a DC restorer or Clamp , this circuit
sets the negative amplitude at the input of C2 to approximately 0Vdc
on the output.
I find the non-connection terminal on C3 to ground.

Thank you in advance.

Thank You for the explanation!

I have modified the Circuit above, to indicate a possible ground. However, in one part of the video, it does appear there is a disconnection: 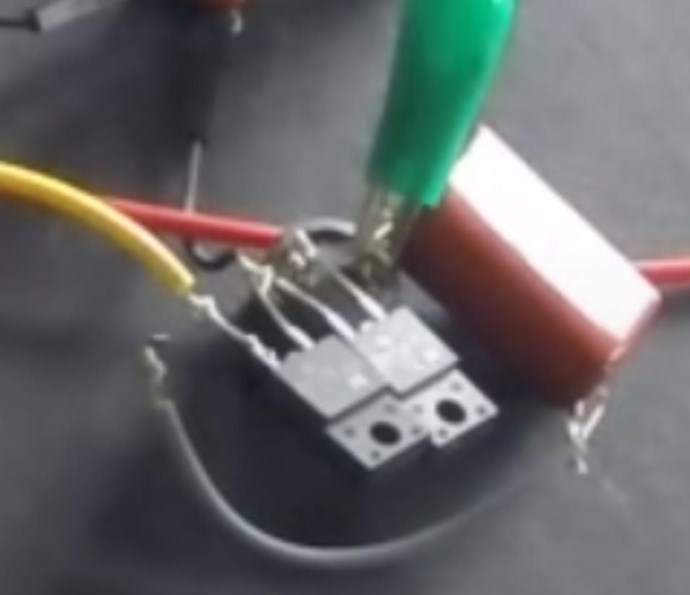 I have marked the wire as a Possible Ground Connection. I think, as you point out, it is wise to account for a possible connection as whats not seen in this image, may be seen else where!

Please Note: The context in this post is from my experiment Here.

The Definition of Ferro-Resonance again:

Ferroresonance or nonlinear resonance is a type of resonance in electric circuits which occurs when a circuit containing a nonlinear inductance is fed from a source that has series capacitance, and the circuit is subjected to a disturbance such as opening of a switch.

Circuit analysis. I was thinking about the circuit of Avalon, particularly the Drain of the Mosfet: 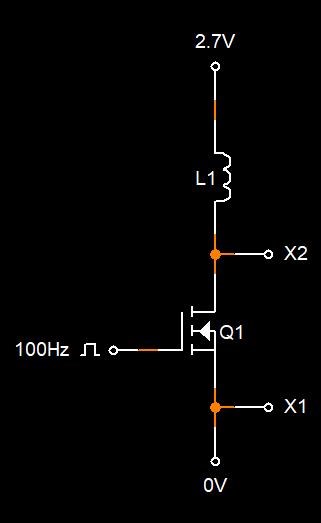 This is easy for those here more advanced than myself in Electrical Engineering, however the difference between X1 and X2 when the Mosfet Q1 is on, is only the RdsOn of the Mosfet. This means, the Difference between X1 and X1 is not quite, but nearly, Zero Volts. This means, in the above Circuit, the Capacitor C2 is Grounded, the Charge is dumped to Ground, and as we have just recently learnt, we cant see this occurring because our scope Ground Reference point is Ground. 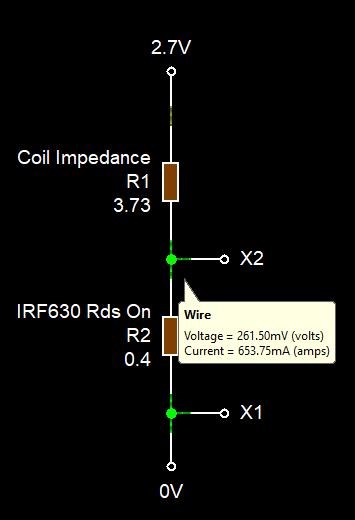 Figures may vary drastically, this is just an example. The point is, the Drain of the Mosfet may not be Zero Volts. However, the voltage will be low enough to say its being Grounded and the lower the RdsOn the closer to Ground it will be.

The Circuit does exhibit some unusual circumstances: 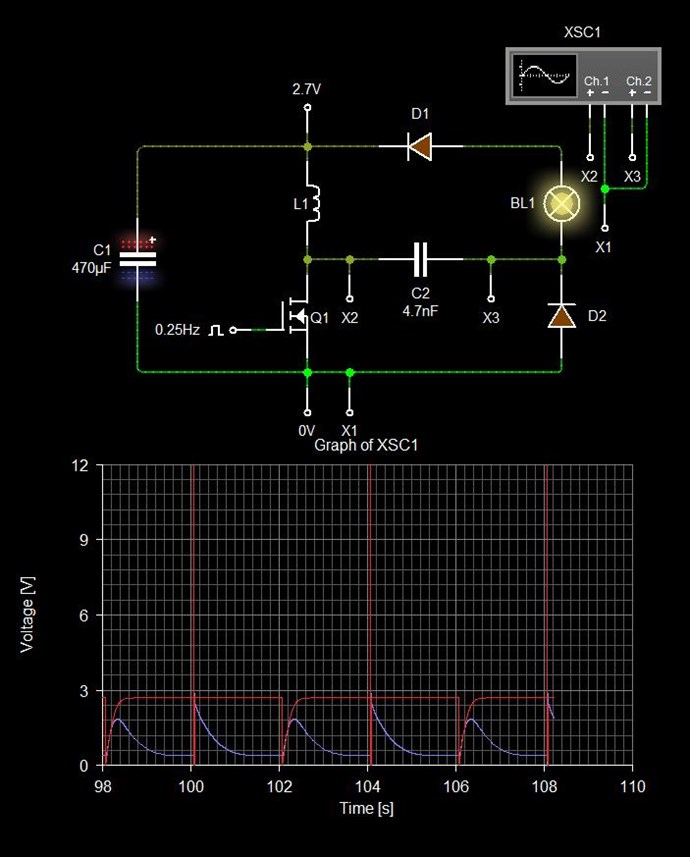 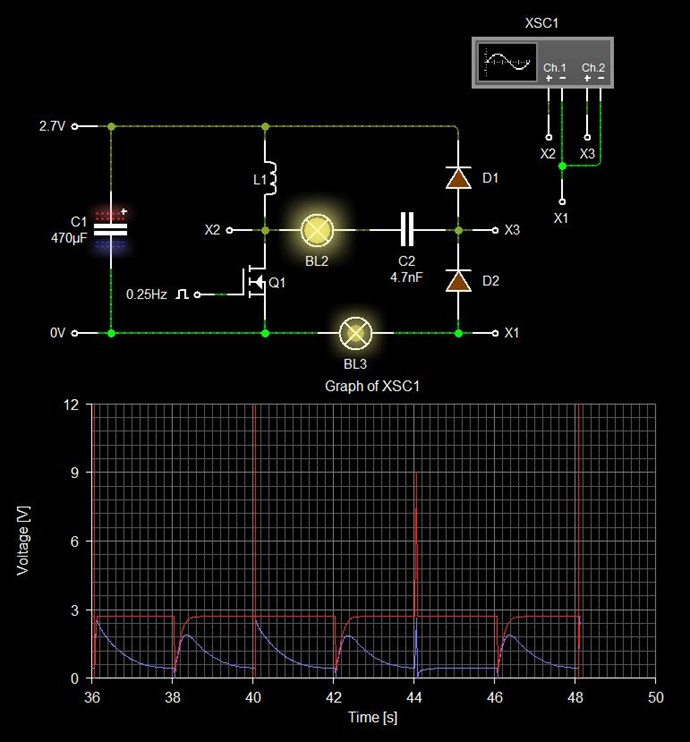 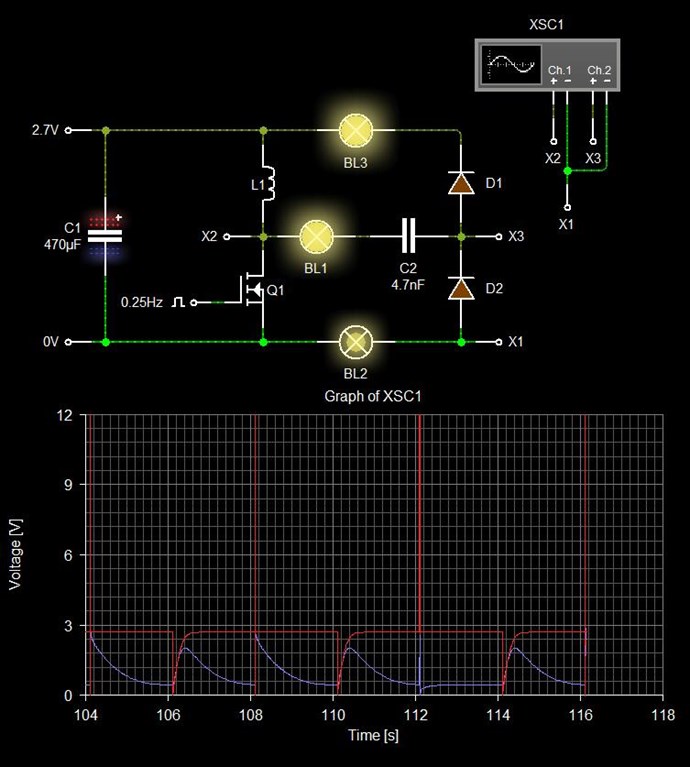 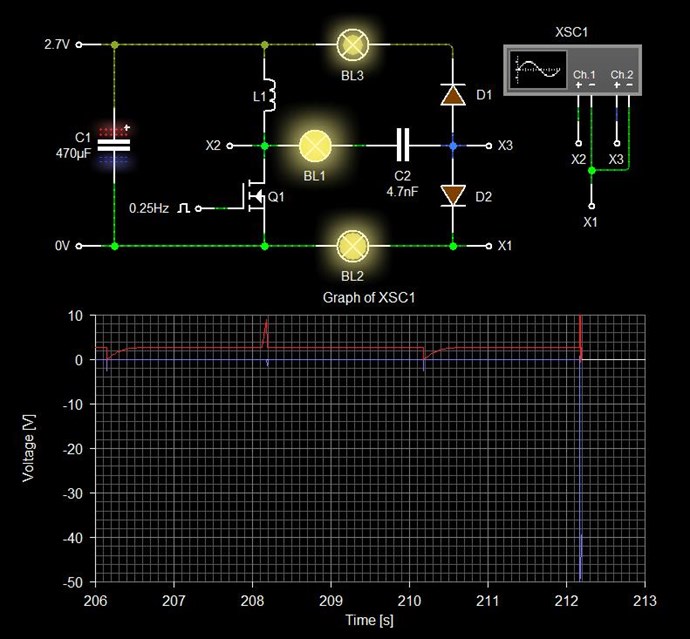 I must point out, YoElMiCrO and Vidura have already replicated this work and shown the same sort of waveform's I have shown here.

You will note the similarities to the work of Akula we studied sometime back:

YoElMiCrO based his work on one of the original circuits: 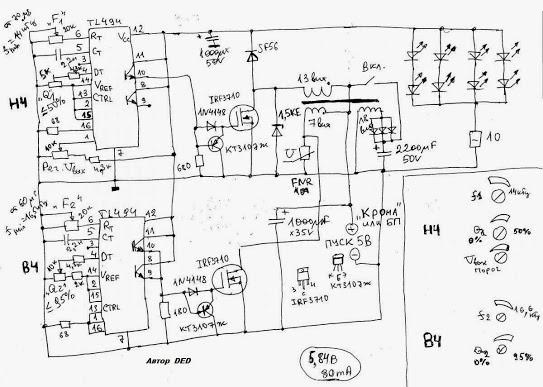 Based on, but not the same as this video:

I have said it before, Members here are very far advanced! We are Light Years Ahead of the other Forums!

I want to point out, this work is a bit different from my work, but I did spend a lot of time on this also. All our work is worth studding and replicating. I am fond of this, because there is an effect here that is simple and easy to verify!

Please give credit to those sharing these works with you if you decide to replicate. They, Members here are putting in the hard work to advance all the peoples of the world, not just themselves like is common else where these days. Without them, Members here, none of this would be possible!

I want to share Ruslan's early videos in reference to this work on this and YoElMiCrO's thread:

In the first video, Ruslan said, near the end of the video:

I say that there is a magnetic, electric current, magnetic field. But if you understand the system electromagnetic field plus Resonance you'll always know how it working

Thank you for attention

I've been waiting and waiting for anyone to come up with a ferroresonance pictures and so far, it seems, I have to do it myself.

Feast your eyes on the one attached.
The pulse's frequency is 630 kHz but the response is around 10 Mhz. (the core is a large (2") ferrite ring). Some other cores I've tested are from 600 kH to 1.5 mHz.
As a matter of interest I have ran spectrum analisys on the last one and it goes all the way to 5 Ghz. However, the ripples in the higher band are insignificant. Typically at the level of -27dB to -40dB.

BTW,
the absolute majority of people here are wrong. Finding the resonance is extremely easy. Just shoot a sharp impulse at the core and, hey, presto!
2 resonances (or 22 for that matter) are equally as easy.
I am running sweeping analisys on dual frequencies pulse system but, so far, there is nothing interesting to report. 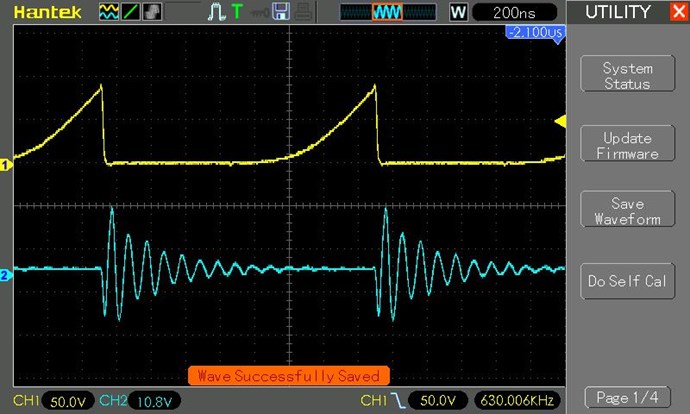 What Avalon posted, and showed back in the day, compared to what he showed in the Circuit shown here are quite different. There is more to it than one may think. It is easy however, RLC Resonance, but in a slightly different way!

One has to be aware of the Ring Down in the Coil, this is the Distributed Capacitance and the Coils Inductance. This is not Ferro-Resonance.

Its odd, I enjoy seeing how industry winds Coils:

Silly, but always interested in seeing better ways to wind coils. We all know how tedious winding Coils can be! However, winding Coils is essential to Magnetic Fields, Current I through Turns N, at Resonance as is pointed out is important. The circuit we have studied: 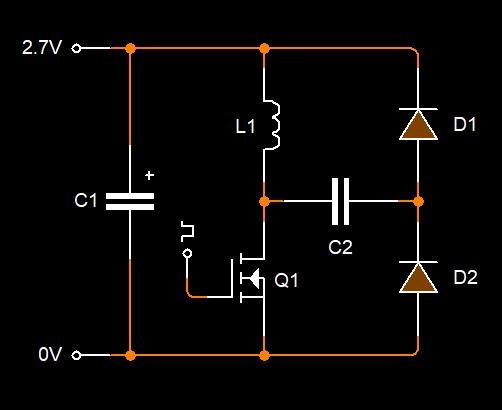 We must question, if the RLC Network that is switched via Q1, the Mosfet shown, that is tuned to RLC Resonance so we see specific Voltage Curves, that well exceed the Voltage on the Input.

We see in the Grandfather Scheme above, and again below:

Very clearly shows the Interactions between the three Coils, 7 Turns, 13 Turns and 19 turns. I redrew this circuit many years ago, and shared it here: Akula0083 30 Watt Self Running Generator 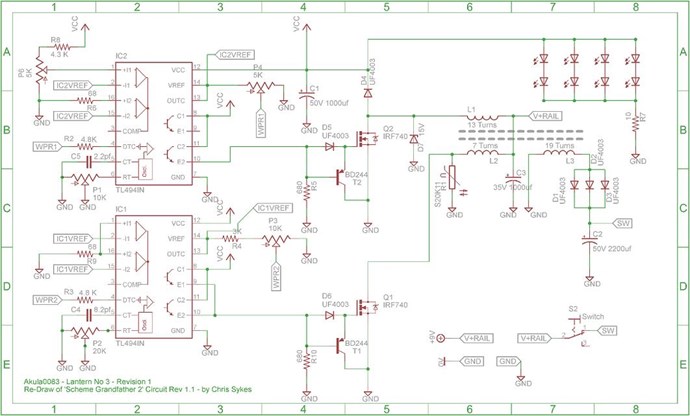 Based on but not the same as this video:

The Transformation of Voltages and Currents depend on the Input, this we know, but we have also discovered methods of tricking Transformers into excess "Generation" of Energy using Asymmetry.

Some work here is similar to the thread: Chris's Replication of Lari Man's Объект 013Б