The importance of The Sawtooth Waveform may not be observed by others, but it must be realised for its importance if we are to understand its significance to Energy Machines! Today I posted this post:

This post is very Important! Please read and understand!

What you bring up has valid points!

You have 10% ON and 90% OFF in input. I have seen this power triangle explanation, but don't you think that in 10% you have already paid for what is happening in the rest of 90%?

In all conventional Transformers, Energy is Transformed, Input is Transformed to Magnetic Force to Output Force, the M.M.F, or Ampere turn is equal and opposite less losses. Input M.M.F is Equal and Opposite to the Output M.M.F less Losses! Any time you offset the M.M.F, force, then you have more work in the System.

This is the point of the Machine we build, to Offset the Input to Output M.M.F, to add M.M.F via the Third Coil!

Someone tested some Melnichenko patent (some LCR circuit) and figured out that 1/4 (quarter) pulsing was beautiful - looks like you have 3 rising waves during ON and the rest 10+ are at decline. Measuring input and output (on resistor R) - revealed that there was nothing there.

A great deal of experiments performed by others are invalid, until one understands the Subject matter and thus the foll operation of a machine, experiments can be completely inconclusive! I have done many experiments that I look back on and think to my self, there is no way that could have worked, I did not understand the machine, if the slightest deviation in the Experiment you are performing from the original experiment, then the experiment is wrong. So we really can not compare unless we have everything 100% Correct and can verify that.

Th waveform you show, is not like any Andrey Melnichenko Experiment Waveform I have ever seen and thus can not comment on its validity or verification.

You have to measure input and output on resistive load, wave shape does not give you full info. Of course - wave shape shows you if you have ferro/wave/accousting/stochastic/whatever resonance.

I always use Resistive Loads, an Incandescent lamp is largely a Resistive Load, this means Power is real, Voltage and Current are in phase - Yes.

The Sawtooth waveform can be both Below Unity and Above Unity! Some examples I have given here on this forum, Don Smith, The MEG Team, Graham Gunderson, Tinman aka Bradley Richard Atherton: 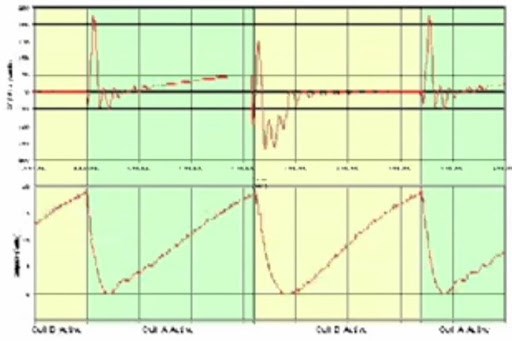 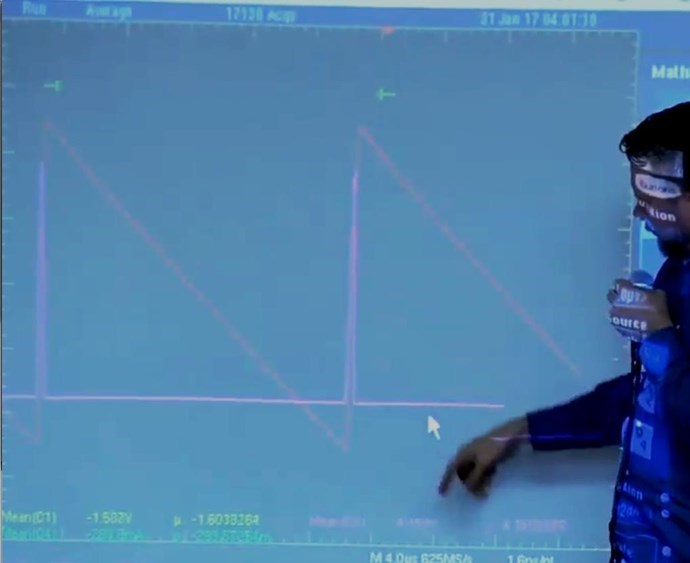 The Sawtooth Waveform is the Defining Lenz's Law Waveform!

I pointed out in my thread: Some Coils Buck and some Coils DONT why the Sawtooth Waveform is so important: 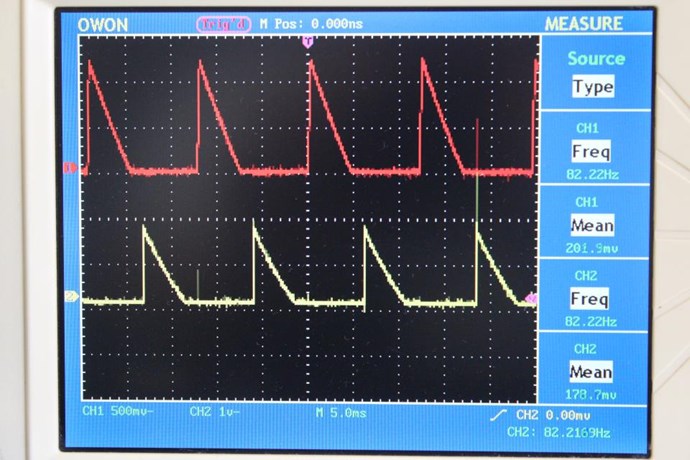 The Sawtooth Waveform is the Result of Lenz's Law, the very fact that Two Magnetic Fields are working together! This Magnetic Field Interaction is CRITICAL to understand! It is the EXACT Same effect as dropping the Neo Magnet down the Copper Tube:

This is the reason the waveform has a Linear Decay, not an exponential decay! A Critical fact to observe and understand!

The Sawtooth Waveform is the Defining Waveform for Energy "Generation"!

A Conventional Transformer has all its Input M.M.F Oppose the Output M.M.F, and the Output = Input - Output - Losses, a Symmetrical Machine, Always Below Unity!

So, simply, we are using a Third Coil to add Energy to the System, via Electromagnetic Induction, that is over and above the Input to Output Ratio seen in a Conventional Transformer: Input : Output = 85%

Above Unity comes from the Total interactions of Magnetic Fields and Conductors outside the Conventional Transformer Theory!

This means, the more Electromagnetic Induction occurs outside of our Input period, the better off we are as a whole. Above unity comes from the Asymmetrical Interactions in our machine! 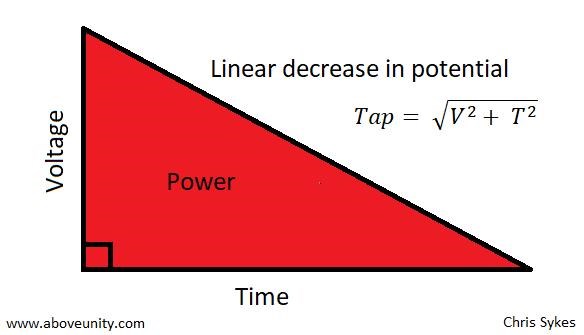 We have $100 and we take it to the Bank. The bank charges us a fee to Bank the Money of 10%, so every time we bank money, we always end up with less money!

The Sawtooth Waveform is the direct Action, Reaction pair of Energy "Generation" is pointed out above, I have pointed this out in other places also. Realising others may not understand the significance, see the importance, I felt it needed its own Thread!

For most here, these process I am describing will make sense, we have covered for a long time, in detail. But for new comers, this subject in its own thread perhaps is a better way to see it from a fresh point of view.

If we have a Conventional Generator. There is equivalent Output Coil M.M.F to Shaft Torque. This means, Output = Shaft Torque - Losses! This is why Science says the Energy Input to a "Generator" is greater than the Energy Out of a "Generator"! Again we have covered this before, but again for clarity:

Now, we must realise: 1 Newton Meter ( N-m ) = 1.00 Joules ( J ), there we have our Torque to Electrical Energy ( Watts = Joules per second ) Output Equivalence, not counting Losses, in a "Generator", as pointed out by Floyd Sweet:

Ref: Nothing is Something - Floyd "Sparky" Sweet.

We can Invoke Electromagnetic Induction and have no Shaft! A Transformer is the Machine that achieves this task!

What we have in our System, is a method to Assist the Input! We can assist the Input, with a Clever means, and if we Halve our Input and make up the Half with an assisting Coil, so we have Energy "Generated" the same for the same Input, then the Energy we Input is less by Half!

This means, Energy Gains are possible by Clever, Smart means of Electromagnetic Induction! You will remember me pointing out: 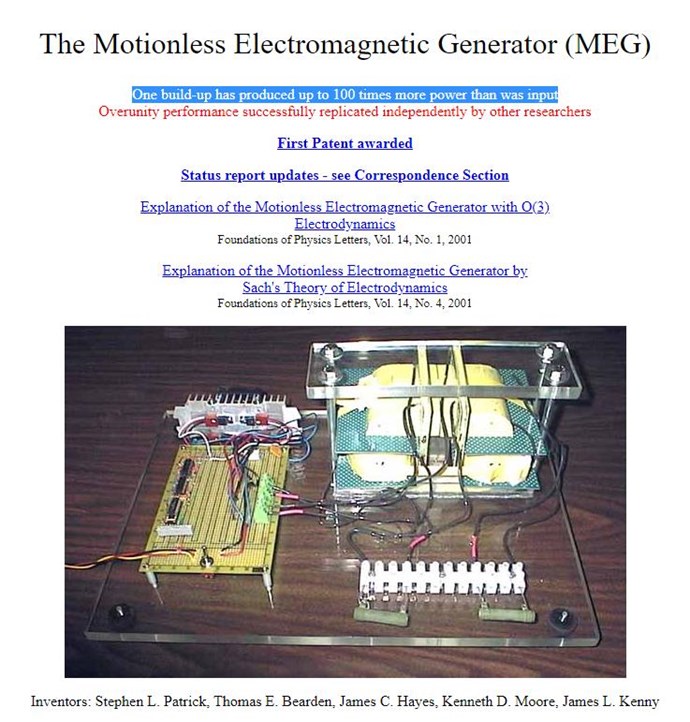 One build-up has produced up to 100 times more power than was input.

What is going on? The MEG has "Generated" 100 Times the Energy that was Input! Very simple, nothing difficult about this! All other Energy Machines do the same thing!

All Energy Machines use the same or very similar techniques! They must, the Energy we see on the Output must be "Generated"! We have shown you how to offset the Force, seen in the "Generator" as Torque, in the Transformer as Counter-E.M.F, as Joules Per second, to see a Gain!

The Gain, you must see a Gain over and above the Input Power, but this is only possible if you "Generate" the Energy with the Force Offset, something that can only be learned in time and improved upon over time. Charge is Separated ( Voltage ), then it is Pumped ( Current ) from the Copper Atoms in the Wire. Einstein's Mass Energy Equivalence! We have covered this also!

That's why I have done what I have, encouraging everyone to do the Experiments I have encouraged!

We are going to have to push past the Boundaries we let ourselves be bound by if the Human Race is ever going to climb out of the Mud! We have to be a lot smarter, and use our Brains as they were meant to be used!

there are currently two ways to generate electricity out of wind, in the first option, the rotors rotation is passed on through a series of gears to a small generator, and the other the rotor directly powers a large generator

Nothing has changed in over 100 Years! 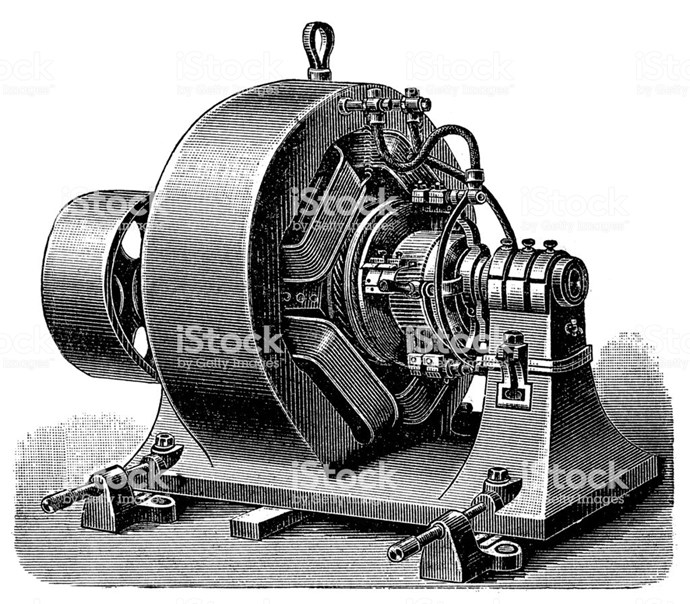 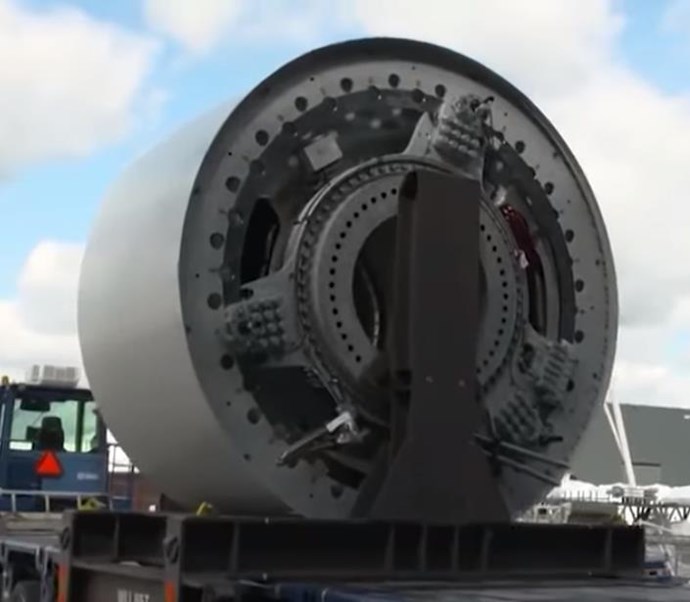 If they only knew about Partnered Output Coils! The Cost! WOW! The dismantling when it comes time to retire is phenomenal! I am at a loss to believe why so much money would be spent on such things, then the cabling into the Grid!

The significance of the Sawtooth Wave under some circumstances is a beneficial waveform to have! Why? Well we know for sure, the Action Reaction Pair from Input to Output Coil invokes this very waveform. I have shown this many times:

We have covered this before, many times. What is M.M.F?

MMF can be thought of as the magnetic equivalent of electromotive force. You can calculate it as -

The units of MMF are often stated as ampere turns (A-t) because of this. In the example toroid core-

where W is the energy in joules. You can also relate MMF to the total flux going through part of a magnetic circuit whose reluctance you know.

There is a clear analogy here with an electric circuit and Ohm's Law, V = I × R. The analogy with electric potential (voltage) leads to the alternate name magnetic potential. There is, however, then a risk of confusion with magnetic vector potential - which has quite different units.

Practical coil windings are made from copper wire which has a current carrying capacity limited mainly by its cross-section. There is therefore a limit to the MMF of a coil in continuous operation of about 3.5×106 ampere-turns per square metre of aperture.

Is there a way to invoke M.M.F into a system and not have to Pay for it? Can Energy be added to a System without having to Pay for this Energy?

Every single Changing Magnetic Field, a Static Magnetic Field add's no Energy, the Magnetic Field must Change in Time, can add Energy to a System! This is basic Electromagnetic Induction principles. No Rocket Science here.

Floyd Sweet in his papers spoke of a Motional Magnetic Field:

The source of energy is unlimited, the virtual vacuum of space itself structured by a motional electromagnetic field is the powerhouse.

Ref: Floyd Sparky Sweet - Nothing is Something

Of all the known fields- electric, magnetic, gravitational and motional E-field the only ones incapable of being shielded are the induced motional E-field and the gravitational field. The nature of the motionally induced electric field is quite unique; in order understand it more fully we must start by parting with a few misleading paradigms. When magnetic flux is moved perpendicularly across a conductor an electromotive force (E.M.F) is electromagnetically induced "within" the conductor. "Within" is an artefact of the commonly used analogy comparing the flow of electric current within a wire to the flow of water within a pipe.

Ref: Floyd Sparky Sweet - Nothing is Something

As long as the M.M.F is in the right direction, we get:

I have given you the Solution, all we need do now is improve on it. Some here on this Forum already have running machines, so with all the evidence, it is futile to refute!

We are Light Years ahead of the other Forums!