Skyrob posted this 2 weeks ago - Last edited 6 days ago

I'm personally on third generation of part G  and working on primaries. some preliminary results are very promising .

I'm not to much for lengthy writing or not intend to wall paint this place. 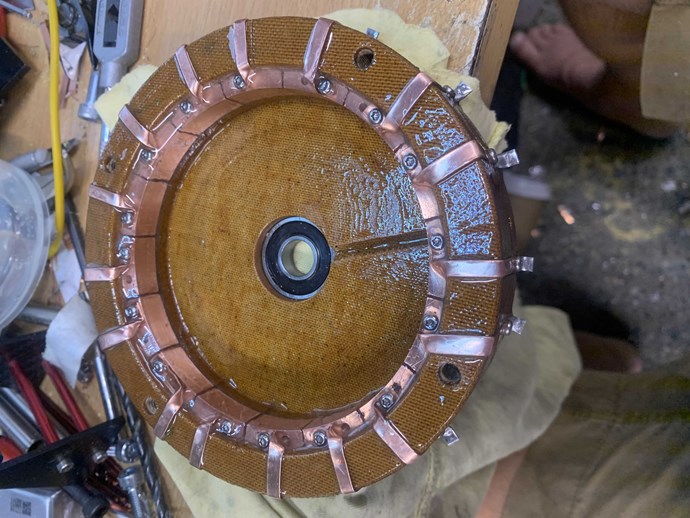 Missing parts in this picture 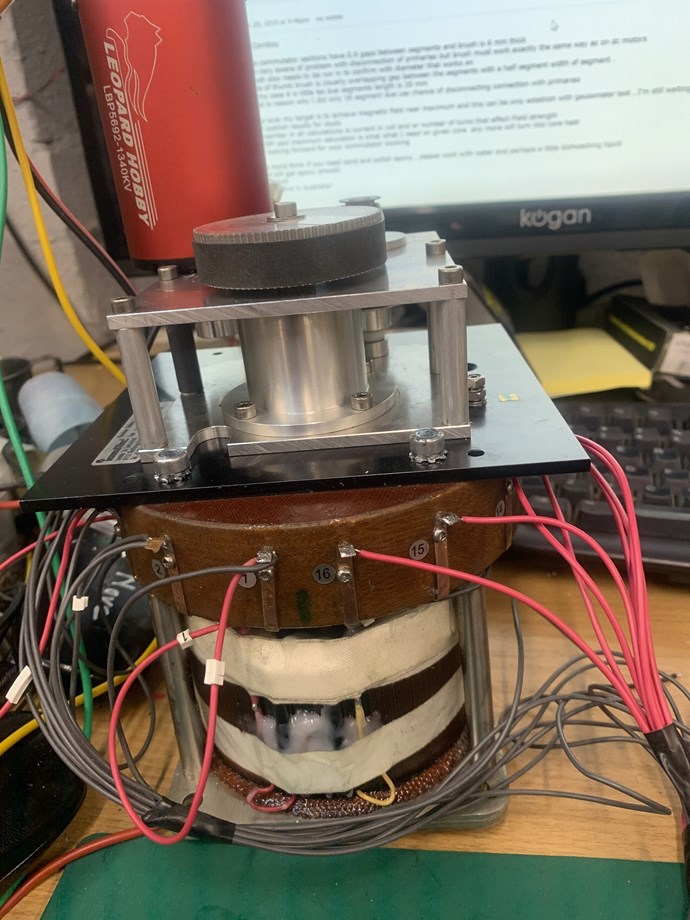 this is complete G including active inductor

I used R - core transformer that has been hacked to this 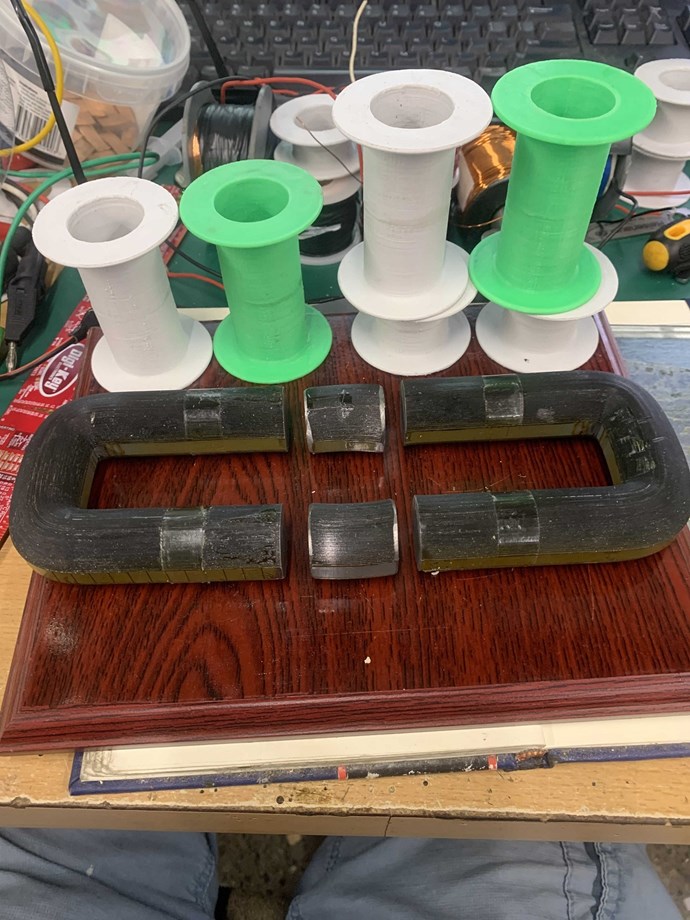 and test with original Primaries (I was lucky primaries been winded in two coils , therfore I had 1x N-N ans 1x S-S combination 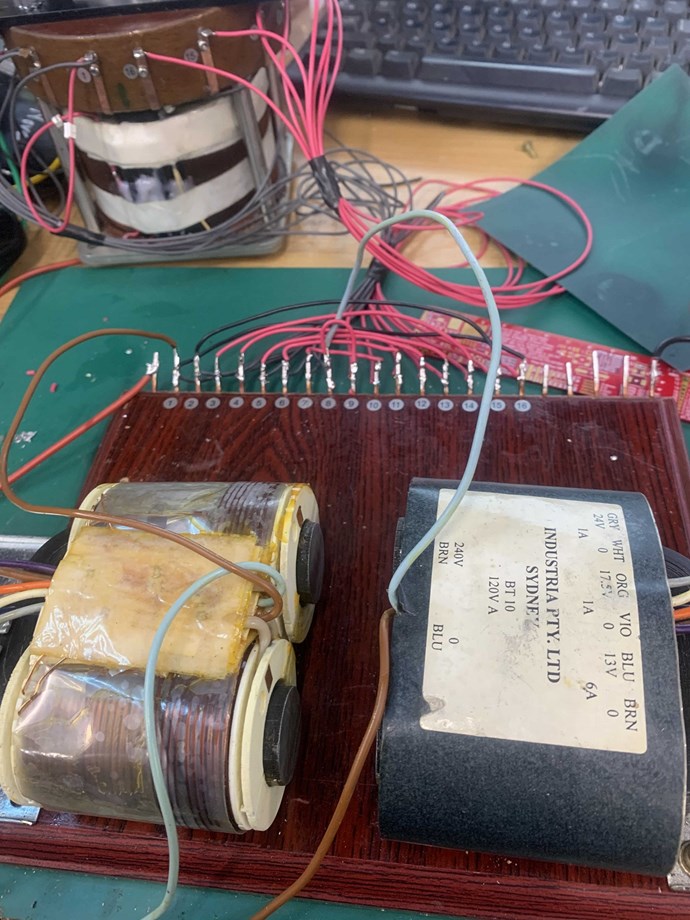 yes secondary output was 180 degrees opposite to each other.

managed to get this output 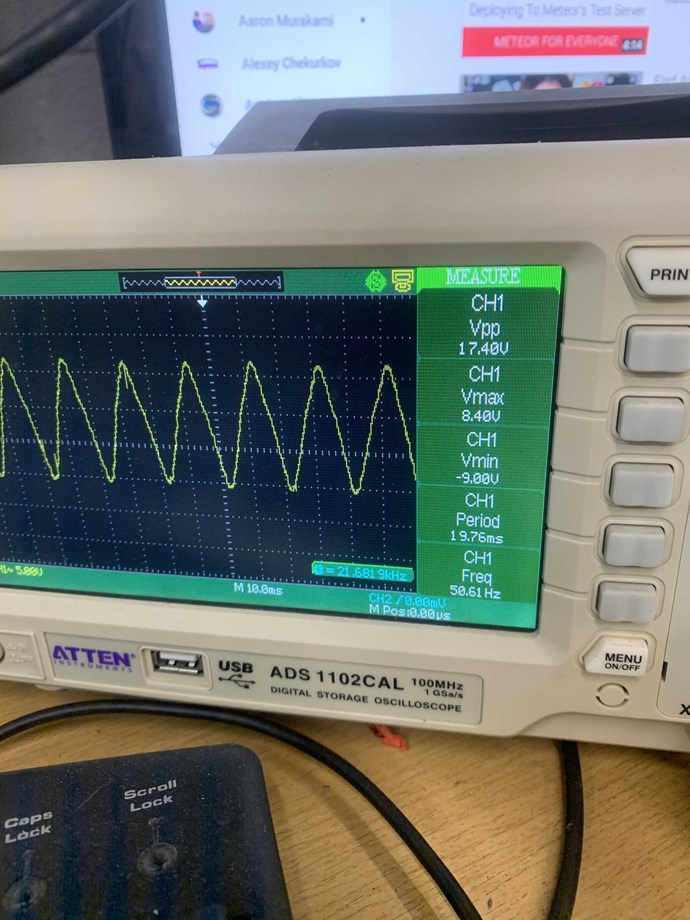 since then I'm trying to increase output from secondary coils, not much luck

using standard transformer (in good order ) and utilizing existing wiring I have concluded that Low resistance of wiring (like taps for 12V AC or taps for 24V AC did not saturated cores even under 6 A current and burning brushes) did not work as that good and that is why I have  used 240V AC side of transformer and @30V DC current was some 1A-2A end average 1.5A . as I have mentioned before I have used both Primary coils in series and therefore I have ended up with polarities N-N   and S-S of course there is not enough primaries as per patent but some indications what to expect.

1/ Therefore it has been my understanding that part " G"  has 16 commutator contact is correct as per patent and connected pairs are part of trick. Also there is big reason why is only 7 steps up and 7 down and that is time constant of inductor. to achieve 50 hz signal there has to be time for inductors and primaries to react to the change of current either way up or down. therefore path with multiple contacts on inductor is wrong way to go about it and is not as per patent

2/ part " R " is definitely inductor and reactance of inductor is set up to the level of current passing thru in control fashion =  with hysteresis of primary winding and core in the mind, for small change in current must be biggest change in magnetic force . this can be achieved on settings of curve where current versus magnetic flux are steepest ( hysteresis ) 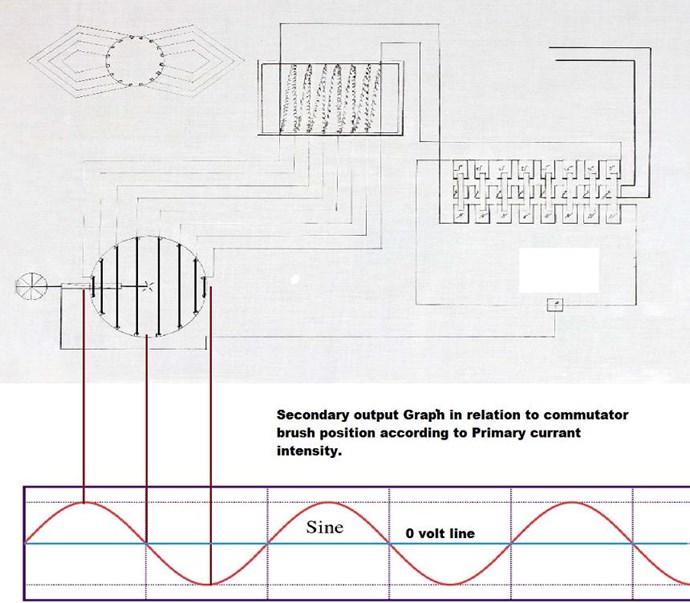 If I may, Part G, if you had to put it in terms of a machine in todays world, what would you equate it to?

Knowing this, and knowing Figuera Powered a Load with Voltage and Current, what would you say the Figuera Machine actually is?

He did specifically state didn't he, he told us, he said what his goal was, what he set out to do:

Because we all know that the effects that are manifested when a closed circuit approaches and moves away from a magnetic center are the same as when, this circuit being still and motionless, the magnetic field is increased and reduced in intensity; since any variation , occurring in the flow traversing a circuit is producing electrical induced current .It was considered the possibility of building a machine that would work, not in the principle of movement, as do the current dynamos, but using the principle of increase and decrease, this is the variation of the power of the magnetic field, or the electrical current which produces it.

The voltage from the total current of the current dynamos is the sum of partial induced currents born in each one of the turns of the induced. Therefore it matters little to these induced currents if they were obtained by the turning of the induced, or by the variation of the magnetic flux that runs through them; but in the first case, a greater source of mechanical work than obtained electricity is required, and in the second case, the force necessary to achieve the variation of flux is so insignificant that it can be derived without any inconvenience, from the one supplied by the machine. Until the present no machine based on this principle has been applied yet to the production of large electrical currents, and which among other advantages, has suppressed any necessity for motion and therefore the force needed to produce it.

This is a very common approach by all those before us! All of the Greats before us, knew Electromagnetic Induction inside out! 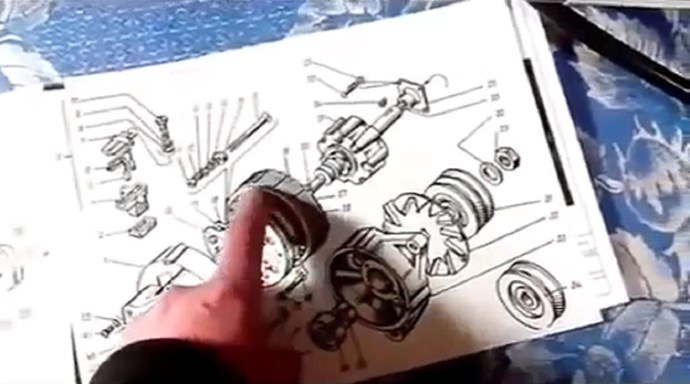 They all knew, Electromagnetic Induction very well! After all, it is only logical, they wanted to Power a Load, V x I is a requirement! Simulating the actions in the Electrical Generator is, or was the primary Goal of Figuera.

If I may, I have an experiment here: Chris's Non-Inductive Coil Experiment that may be of some use?

Also, I have a Support Page, a Reference Page and a Resources Page to try to help others out.

yes you are spot on part G is High power function  generator,  that this principle is used by many other above-unity devices , Floyd Sweet had magnets to assist his output

I have ordered some magnets to do a little test .

I'm not making any conclusion from it yet your comments are welcome!

Rakarskiy posted this 2 weeks ago

In General, Figuera completed his electrostatic Converter in the early 20th century, receiving a patent from 1902. Tesla only "purred" when he found out about this design. Figuera, this is a respected engineer, and together with the mechanic, they made a working device. Patent rights that were purchased at a high price (estimated value of 320 kg of gold as of 1902). He converted the Electromechanical Dynamo into a static DC/AC Converter, with a frenzied efficiency. Error in the approach of followers, as to a transformer, and this is essentially a generator, with transformer excitation. Design Figuera is TRANSGENERATION. 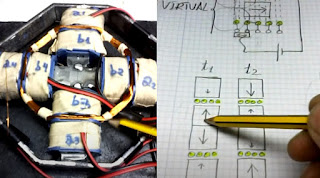 i have test magnets in secondary core and find out it actually dampened circuit to point where under the same conditions output with magnets was only 0.9V and -0.8V

this was after introduction just positive puls 30V @ 2 A into each secondary side separately this is giving me answer that magnets are most likely not used in secondary coil of figuera generator, feel free to comment 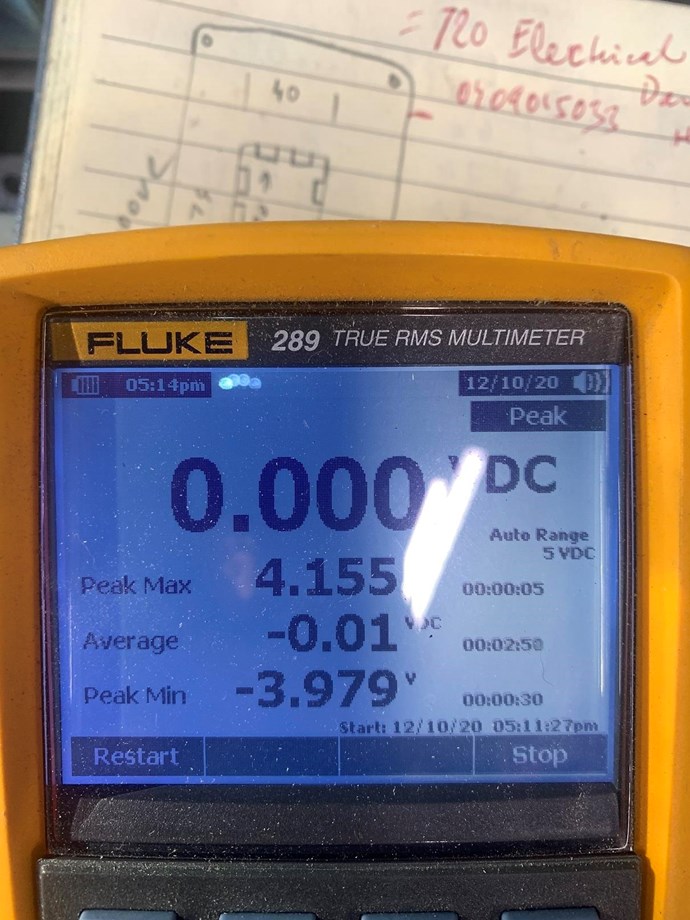 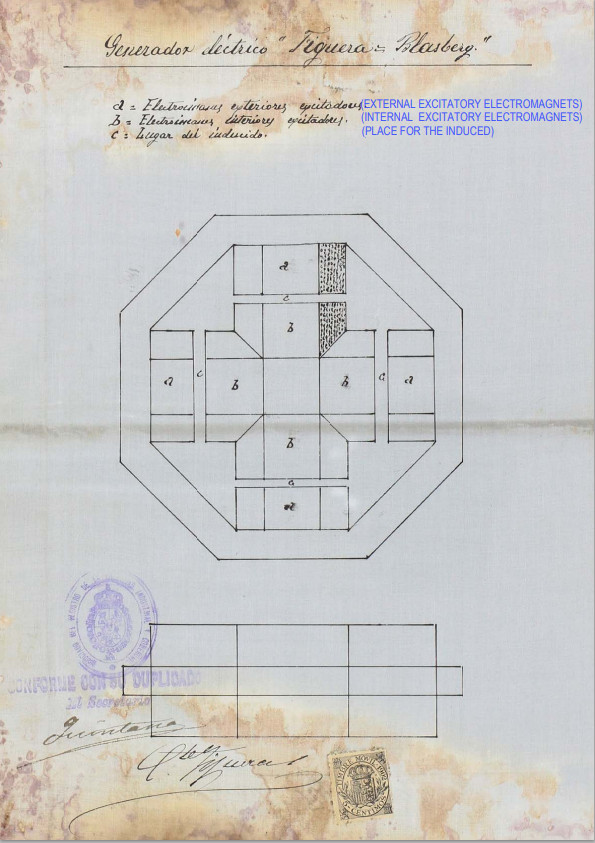 it is then in winding

I have pulled one side of coils apart and I'm going to rewind some different wire thickness and winding configurations.

I will also try the bifilar wind.

thank you for your comment , I believe that cores are iron material

Vidura posted this 2 weeks ago

Hey Rakarsky This makes a lot of sense, I have done some tests with coils and magnets,band came to the conclusion that the angle of the magnetic flux center is changing in this device, therefore the core of the induced has to be of cross or X shape. Excellent post. Vidura

Please feel free to comment , or please stop me from doing something totally wrong

this is last part "G" that I'm currently working on:

commutators are from Eurton Electrical: 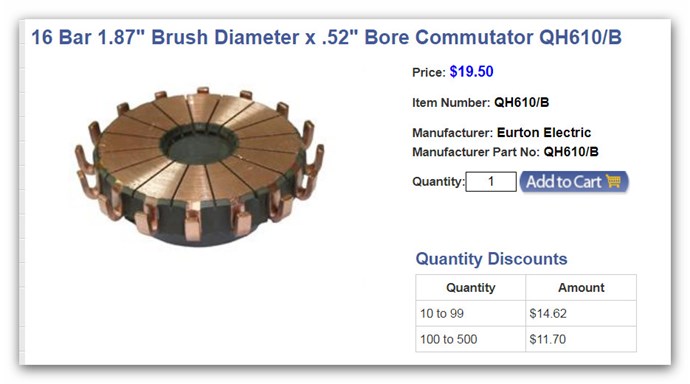 and slip rings from eBay: 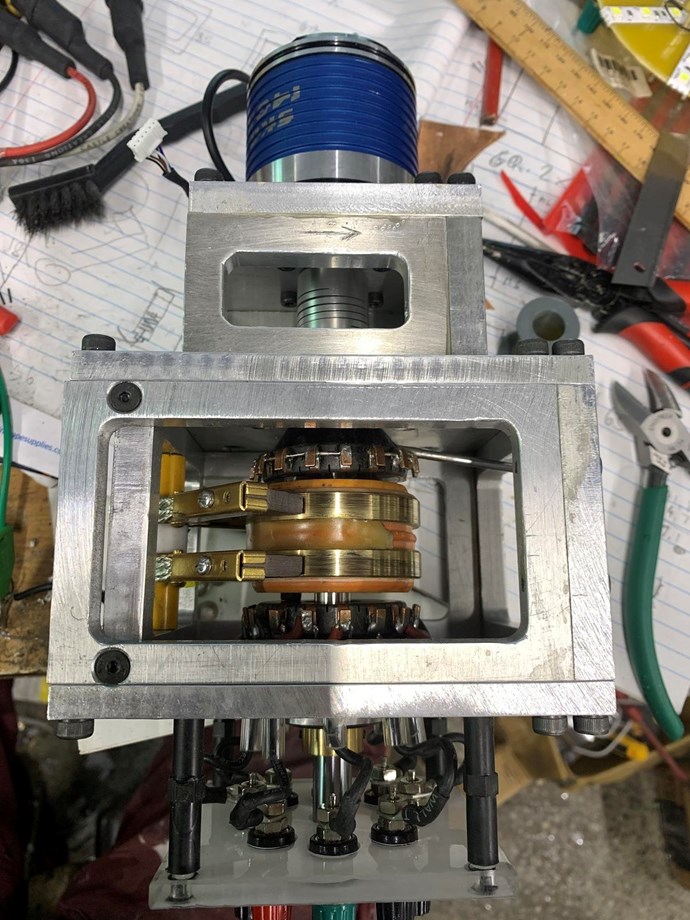 A little detail of the same:

patent saying that brush must "make before break"

and interesting light visualisation of AC to DC converter

Rakarskiy posted this 1 weeks ago

Good time! Got a good channel on the subject!

Skyrob posted this 2 days ago

finally I have managed to get my winding machine going and wind coils for experiment: 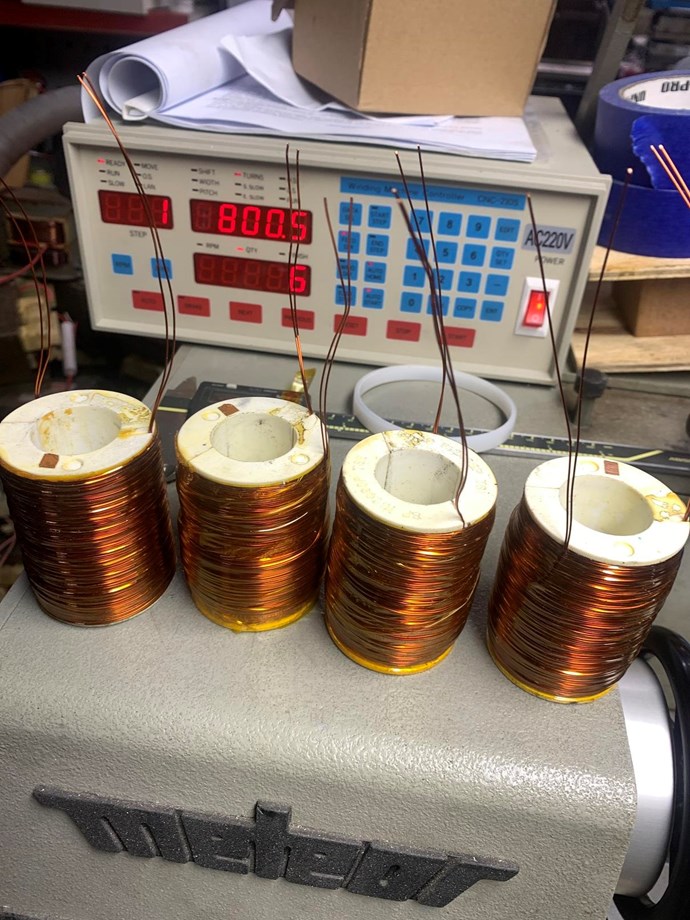 lay out for experiment 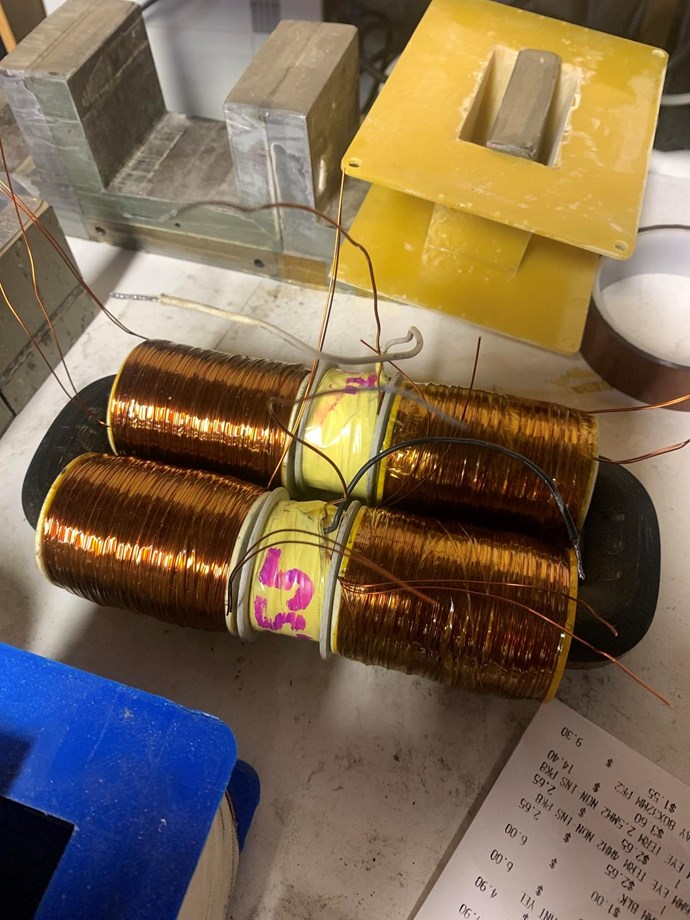 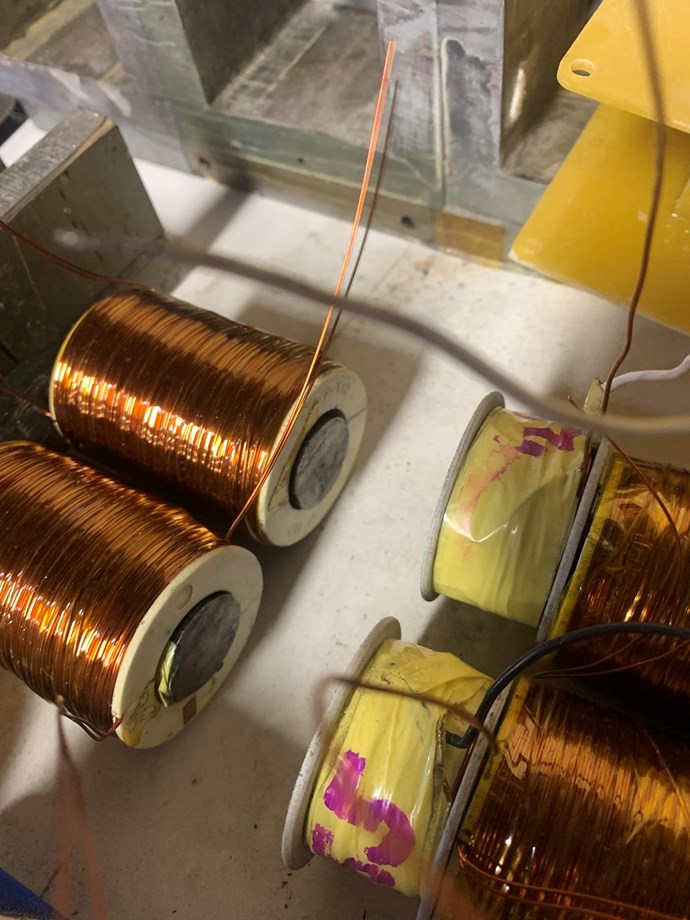 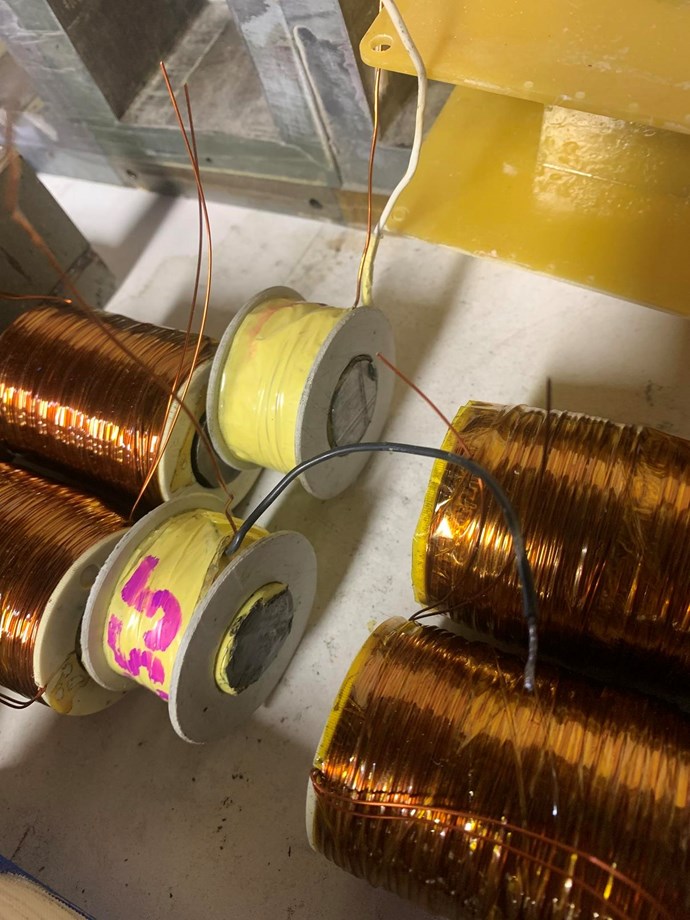 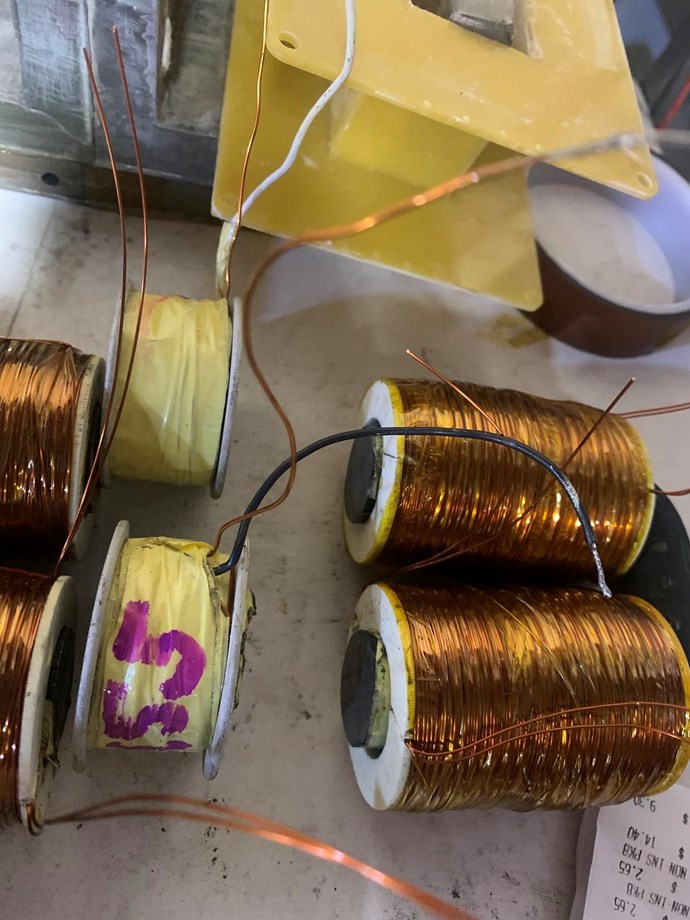 Skyrob posted this 2 days ago

there is short video of winding coil - bifilar wind:

What a nice machine! With this you will be prepared for mass production, once you have a working prototype. 😉