Hi all, I'm back to experimenting with the bucking coil technology, it seems to be the most promising and is within my resources.

Using a core made from stacked ferrite toroids, glued together.

Getting nice output and input current lowers when partnered coils are loaded.

As can be seen, have it set up to easily be able to try different wiring configurations, even a full coil length over the bucking coils option.

The multistrand coil to the right in picture is for a different project.

The 555 timer circuit is to the right in picture and the 6 watt led bulbs in back are used as a load. 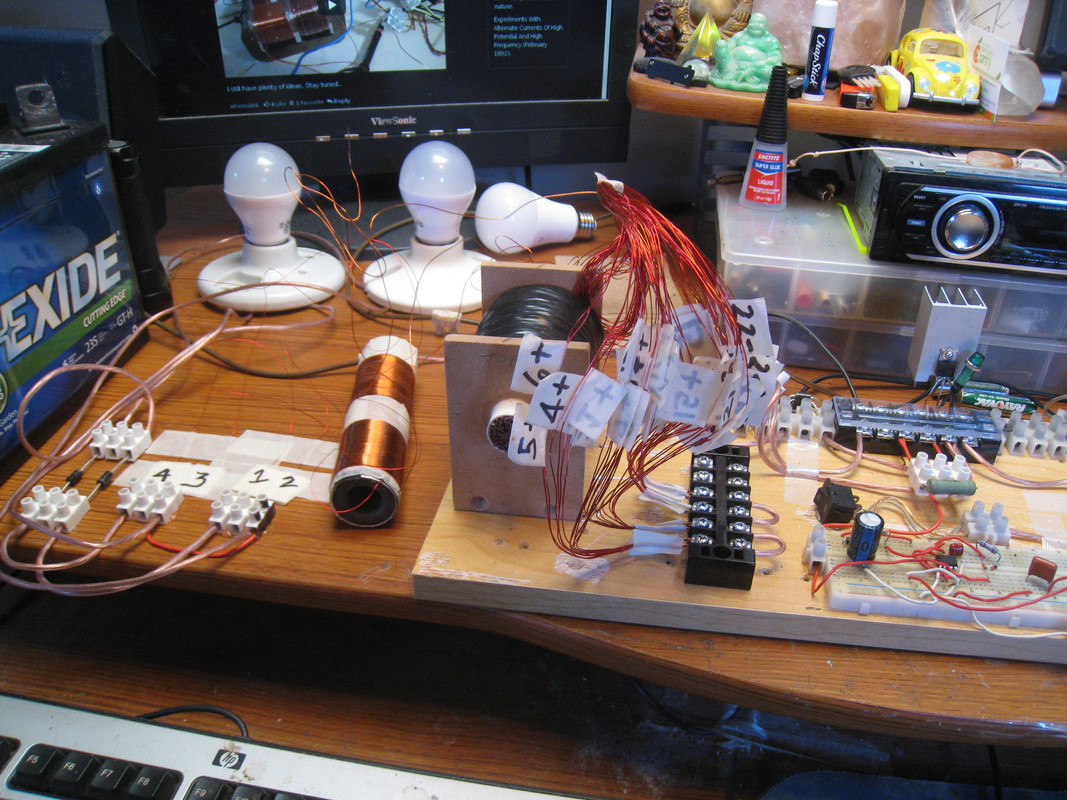 Good idea to use a 555 timer! Will love to seethe result.

Hi wistiti, good to hear from you.

What I noticed with my setup at the moment, (and of course it using one primary coil over half the core or over only one partnered coil), is that when pulsing the primary with the partnered coils in parallel as outlined by chris, with no load attached to the parallel output.

It seems the input increases a little, perhaps the coils are not perfectly matched and one is feeding into the other and causing a load to be seen by the input.

I will try and match those coils soon though.

Also, my partnered coils are wound as chris suggests is best, counter clockwise and clockwise.

A standard, 6 watt, 120vac led bulb is used as load at the partnered coils output.

Without the 1N5408 diode across the outer partnered coil, in whatever orientation is needed, the led bulb brightness is cut in half and the input current increases a little.

Though with that diode in place, the led bulb brightness doubles and the input current decreases a little more below no-load input current.

Admin
Chris posted this 3 weeks ago

Nice work, Thank You for sharing your results! Its good to know other experimenters are getting the same set of results that we are!

I am glad you have joined our team!

Wistiti posted this 3 weeks ago

Im curious, have you also try connecting the POC output parallel? I mean the load between the center and the extremities of the POC?

Thank you for sharing!

Hi chris, thanks for the kind words.

They seem like similar results, the coil/core is making a sawtooth like audible sound, so it is probably close.

Glad to be here chris.

Hi wistiti, yes, though that is when I noticed without load, the paralleled coils were increasing the input amps a little, compared to the coils disconnected from each other, with the 555 timer pulsing the primary coil with mosfet switch.

Though that may be due to the coils not being matched, not sure.

Hi Sky! Does your poc have the same number of turns?

I have try try with what Yoelmicro have share and it seem to be more efficient... Hope it will help!

Thank you for the clarification, it is really appreciated!

So if i understand correctly N2 must be first a multiple of 7 and N1 is the same as N2 plus the number of time we have 7 turns in N2.

Much more clear for me now!

Thanks again for your contribution!

It turns out that in the transformers it is very difficult to make turns decimals, this is because once it enters the core It is considered a complete turn. There are methods to make half turns, using the posts sides of the E-transformers, but this is not the case. That is why the best relationship of turns would be this. Every 7 complete turns of N2, N1 will have 7 + 1 = 8. It is important to note that only multiples of 7 are allowed. For example, let's say that N2 = 14 Turn is twice 7, then N1 = 14 + 2 = 16 and so consecutively. Then the final relationship would be: N1 = 7n + n. Where 7 is the smallest number of turns for N2 and n is the number of times you rolled 7 turns in N2, that is a multiplier.

I don't know if I help you.

Wistiti posted this 2 weeks ago

Hey Sky, i re-look at the picture of your experiment and you seem to have a big gap between your poc. Is there a reason for that?

OriginalSkywatcher posted this 2 weeks ago

Hi wistiti, I doubt my POC coils have the same exact turns, as did not count them, just measured similar length, probably close though.

Will look into yoelmicro's experiments.

There is no gap, well maybe a slight gap, that is just masking tape holding the primary coil in place, which is wound on top of the POC's, on one half of the core.