Please note, this page is now no longer on the Internet, I recovered it from Archive.

16 March 2008. I've been looking at the B-H curves for toroidial core made with Fair-Rite type 43 material and I thought the work might be of general interest.

First of all, "what's a B-H curve and why should I care about it"?

Rather than re-invent the wheel, we'll start with the ARRL Handbook's summary of magnetic components. 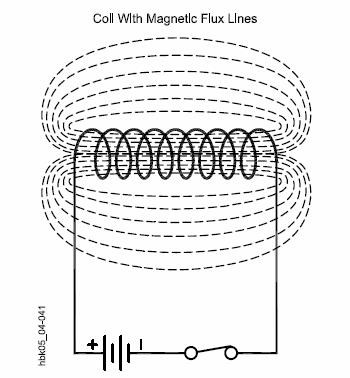 The magnetomotive force (mmf) produced is proportional to the current flowing in the conductor and the number of turns.
Of more immediate interest is the magnetic field strength, H, measured (in the CGS system) in Oersteds, given by: 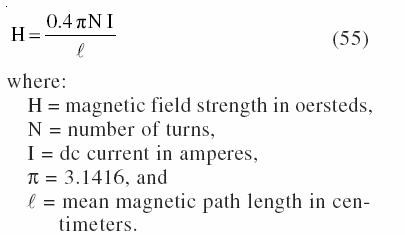 Certain materials concentrate the magnetic flux lines, increasing their density. The ratio of the density of the flux lines with the material in place to that of the same form in a vacuum is defined as the permeability of the material.

The magnetic flux density symbol is B and the relationship between B and H is:

Air has a permeability essentially identical with that of a vacuum.

Plot B versus H, shows a relatively complicated relationship for most practical magnetic materials. 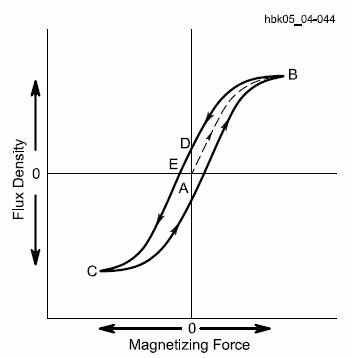 The retentivity of magnetic core materials creates another potential set of losses caused by hysteresis. [The above figure] illustrates the change of flux density (B) with a changing magnetizing force (H). From starting point A, with no residual flux, the flux reaches point B at the maximum magnetizing force. As the force decreases, so too does the flux, but it does not reach zero simultaneously with the force at point D. As the force continues in the opposite direction, it brings the flux density to point C. As the force decreases to zero, the flux once more lags behind. In effect, a reverse force is necessary to overcome the residual magnetism retained by the core material, a coercive force. The result is a power loss to the magnetic circuit, which appears as heat in the core material. (ARRL Handbook, 2006, Page 4.27)

How do we measure B and H?

Measuring H is relatively simple. From the equation above (ARRL Handbook 55), H is a function of the current, number of turns and the mean inductance path. All of these parameters are known or measurable.

Measuring B is a bit more difficult. I'm not going to go through the math here, but it can be shown that if the core is wound as a transformer, the voltage on the secondary (if lightly loaded so that no appreciable current is drawn) is proportional to the rate of change (derivative) of B versus time. Thus, by integrating B, with, for example, an RC integrator, it is possible to determine B. The relationship is given (See Steward's catalog 11D at page 33 for example) by: 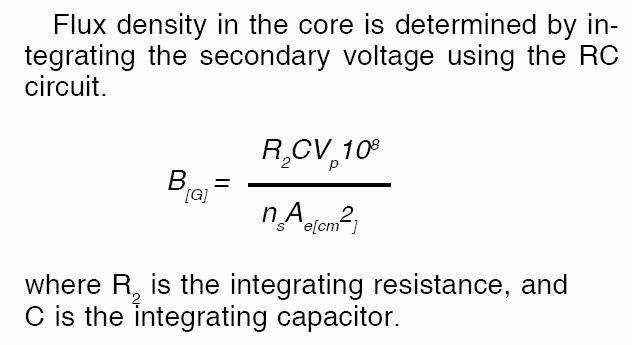 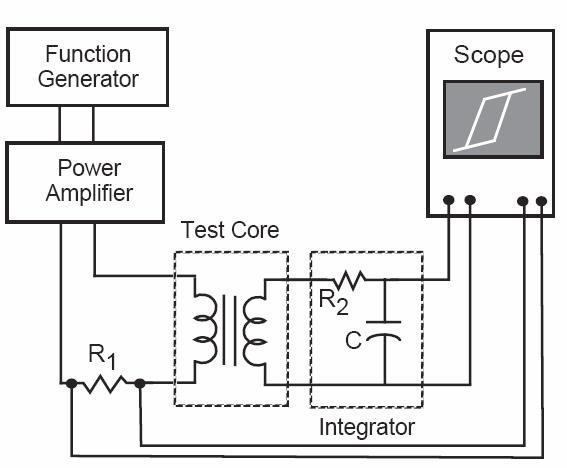 The photo below shows the test transformer and RC integrator I used. Instead of using R1 to sense the current, I used a Tektronix 6022 current probe. 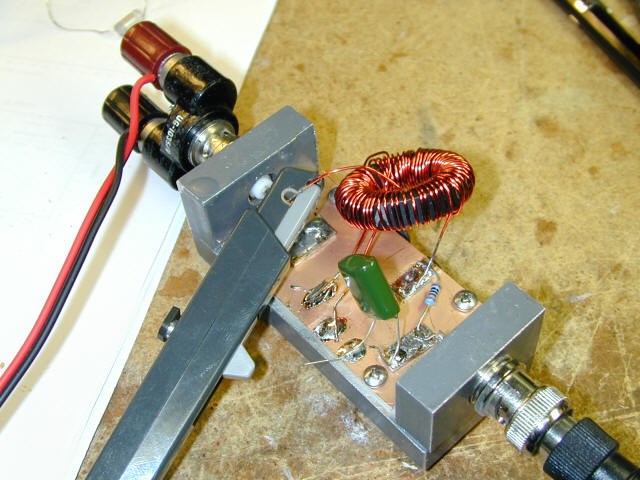 Current is measured with a Tektronix 6022 clip-on current probe. The signal generator is an HP200CD, and the power amplifier is an Acoustic Research AR-1. To protect the AR-1 and to limit the current, a 4 ohm, 100 watt resistor is in series with the primary winding.

Data is taken at 10 KHz. The RC integrator uses a 10K/1% resistor, and a 0.22uF polyester film capacitor, measured and selected to be within 1% of nominal value. A Tektronix 2246 oscilloscope is used to display the data, operated in XY mode. The X axis has the drive current (H) and the Y axis displays the integrated voltage output (B).

The impedance of the integrating capacitor should be around 1% of the resistance of R, at the test frequency. R should be chosen so that the secondary current is negligible in comparison with the primary current. At 10 KHz, the 0.22µF integration capacitor has an impedance of about 72 ohms, so the 100:1 ratio is satisfied.

For ease of computation, I've substituted the actual values for R2, C, N, Ae and le and restructured the equations as:
H = 5.16I, where H is in oersted and I is amperes
B = 19.8V, in gauss, where V is the integrator output in millivolts.
Of course, these numerical relationships hold only for this particular core size, number of turns and RC integration values. 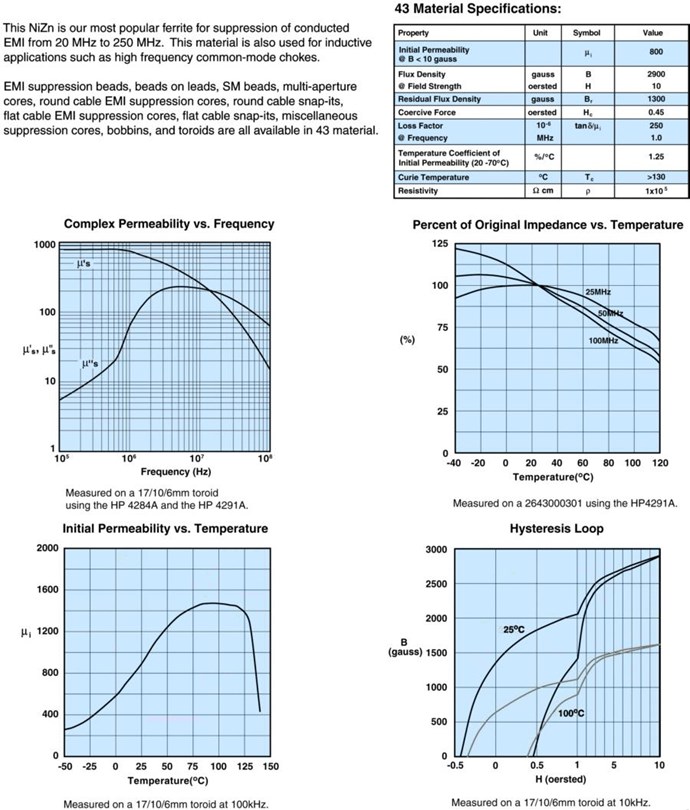 Let's look at the measured data.

The first illustration is at low drive. The horizontal axis is 2 mV/division, and the 6022 current probe is in 1mV = 1mA mode. Hence the furthest upper right point on the B-H ellipse corresponds to a drive current of 7.6 mA and an integrator output voltage of 3.2 mV. The corresponding B and H values are:

Permeability, initial - µi The permeability obtained from the ratio of the flux density, kept at <10 gauss, and the required applied field strength. Material initially in a specified neutralized state.

Amplitude Permeability μa – The quotient of the peak value of flux density and peak value of applied field strength at a stated amplitude of either, with no static field present.

At the limit, as the applied H field is small such that B is <10, the initial permeability and amplitude permeability will be  the same. My test setup does not permit accurate measurements at very low B levels, however. 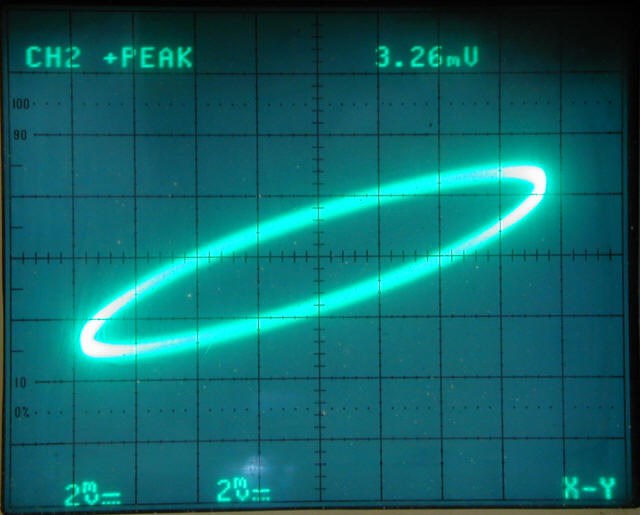 As we increase the drive level, we start to see signs of saturation. 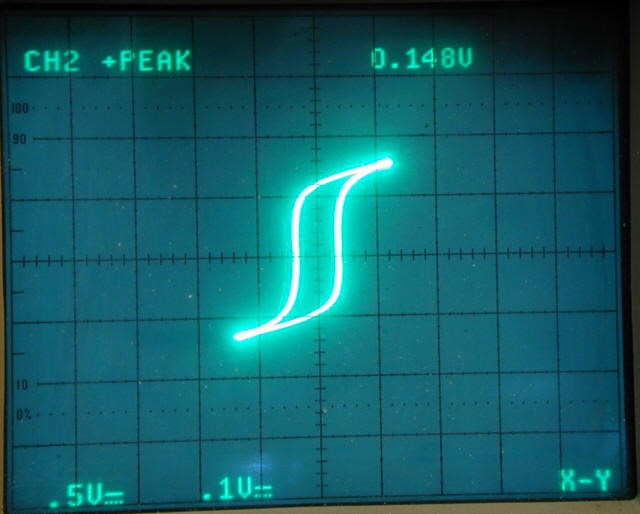 In the final image, the peak current is 2 amperes, corresponding to H=10.3 oe B is about 3800 gauss, as into gross saturation where B increases only slightly with increasing H. Fair-Rite data says that B at this drive level should be around 2900 gauss, but again the data sheet is is for a smaller core. 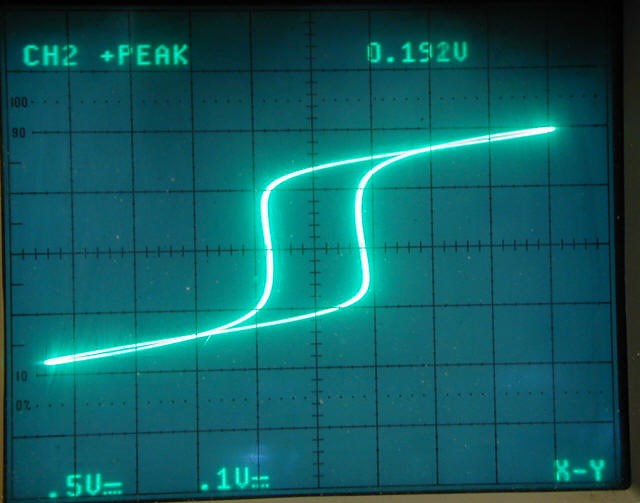 Finally, we can note that when H = 0, i.e., when there is zero current applied, there still is a B field. In the above figure, it's around 2600 gauss.

If this information breaches any Copyright, then please let me know! I share this information under the Freedom of Information and for Educational Purposes only. If the page was still available on the internet, then I would link to it and reference it.

This thread is for informational purposes only!