Hey, guys, following a discussion with my wise friend Vidura, I discovered this in my SG: 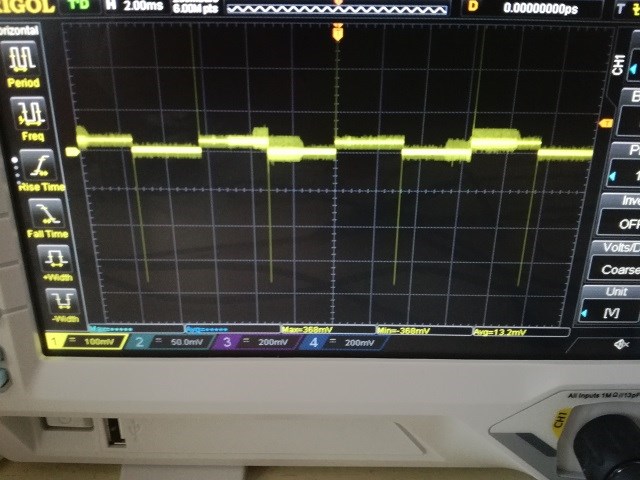 The yellow trace is the voltage over a 10 Ohms resistor at 5V output from the SG.

I think those spikes are causing a lot of the problems I've seen over a long period of time, including misfiring of any optocouplers I tried.

I have the same models of SG and scope, I can test this when I get home this evening. So you're running with AMP=5V on SG ? I'll use 1ohm shunt for this scenario. What's the schema of how you tested this ?

The exact circuit is this one, part of the Power Switch from Vidura, but you can also replace the optocoupler with a 1K resistor. 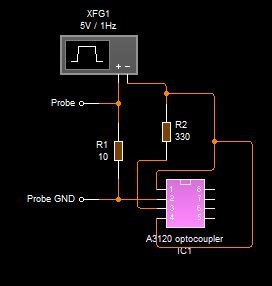 Be careful not to short out the SG as I don't know if it's protected. I'm thinking to switch to MCs for producing the square waves.

Hm, I don't know if it's protected either and I'm not sure if I can find a 1k resistor, maybe there are other options. I'll call you before preparing the test.

now i saw the scopeshot on my PC , the spikes look strange, and the signal not clean at all, you could put a probe to measure the signal voltage directly, if there are spikes also better do not connect the A3120 driver, the emitter led could be damaged. if the signal appears clean in voltage mode, check the wiring or try a different current sensing resistor. Hopefully you can resolve the issue.

PD you can substitute the driver IC with a small led for testing. Also try to put the current sense resistor on the low side and the scope ground to the SG negative.

@Cd_Sharp, I tried this scenario but with a LED, an 1 ohm resistor and AMP=6V (else the light of my LED is very low), I don't see that spike.

Here are some photos (link to larger image here):

Are you sure that's not just an scope artifact because of the low frequency ?

I suggest doing the same test using a LED, check if the spike is still present. Or maybe there is something in the optocoupler's circuit provoking that spike ?

A test with a simple LED and current-sensing resistor just like I tried will clarify that spike's source.

Edit: Also try with the auto-trigger feature of the scope, if it's just an artifact this could remove it.