Are these coils opposing?

A little while ago I was building a circuit in order to replicate Clemente Figuera's transformer.  Rather than build a current supply in the same style as Figuera, which is a little complicated and likely a little lossy, I thought it would be simpler to use the 240v 50hz house supply.

The house supply is of course, single phase.  I somehow needed to achieve a supply of two anti-phase currents from this single phase.  The solution was to build a transformer with two identical secondaries and supply each of the Figuera primaries from opposite poles of those secondaries.

Figuera described climbing and falling sines in his patent so I imagined he was earthing his supply battery, thereby causing his sine waves to bottom out at 0 voltage..  But was he, and does it really matter?

While I was considering this I noticed something that was in fact obvious, to anyone but myself I imagine

It was not possible to model a single primary with two secondaries as I required so I connected two transformers in series, each with a single secondary.  I put the load in series between those secondaries and was quite surprised at what it showed.  If I had more experience, perhaps I would not have been.

Although the simulator is not altogether accurate is some respects, what I saw was, for me, very interesting and not a little confusing.  I shall upload a circuit diagram for everyone's perusal.

I welcome everyone's observations and criticism. Please be kind though.  I can be an idiot at times.

I do have a few questions about this that forum members may be able to answer for me.

Apparently my file didn't upload so I will try to add it again.

You can upload your image to any image hosting provider (I use imgur.com) and paste the link in your post.

Thank you for that!  The top image is the circuit diagram, the second is a screen shot of the secondary sines. Thank you very much again!  Your help is greatly appreciated.  It is hard to believe I am actually a web developer.

When I first considered Figuera's transformer it occurred to me that two anti-phased secondaries could be considered to be a load at 90° to the primary.  Adding the two secondary phase angles and dividing them by 2 would be the 'average' phase angle of the load.

I had discovered some time ago that a 90° phase angle between the primary and secondary was a method of cancelling the counter magneto motive force that normally occurs in tightly coupled windings.  At the time I could not find a way to maintain that phase angle and also achieve a reasonable coupling.

Tesla did patent a dual core transformer (US patent no: 433,702) that was specifically designed to achieve exactly this 90° phase shift, whilst also maintaining phase stability.  Tesla stated that it 'may' show a load at times when actually unloaded.  After examining it carefully I came to believe it needed to be designed for a specific load.  According to Tesla it worked for both ohmic and inductive loads.

Someone replicated that arrangement a few years ago and called it the 'Gabriel Device', and claimed it as his own independent invention.  As he was unable to explain the process by which it did not couple back to the primary I have to believe he simply replicated Tesla's patent without giving due credit.  The fact that it worked is another vindication of Tesla.

This 90°, on average, phase angle also shows in the transformer modeled in those images too.  I find it interesting, and somewhat confusing that many theories and core coupling arrangements end up boiling down to the very same principals.  I guess three persons viewing a valley from three different peaks may all describe what may seem to be different locations.  However wisdom may find that the combination of all observations are in fact a better overall description of that very same valley.  It is often foolishness, though certainly not always, to insist that one must hold a single viewpoint above all others.

Perhaps, in fact it's likely, that more than one theory is actually correct and that in one way or another they are all, or many, or only some, valid observations of the very same underlying phenomena.  In time these often apparently divergent views can be blended into a far more splendid picture that can be seen from multiple complementary viewpoints.  Like a fractal image wherein every individual piece contains the whole.

Perhaps someone on this forum might be able to caste a little more light onto this subject.  I am hoping for that personally.

uploading images, please see: Help Using the Forum, the link is on the side

Please let me know if uploading Images is a problem for you, this should work for all.

The Figuera device is NOT a Transformer in any way shape or form, it's a Generator. also there is NO Phase difference between the primaries they are just reduced and raised at the same time from the same DC power supply.

Figuera's device is far from , as you say, Lossy. it is a very efficient device and no Figuera did not earth nothing as there was no reason to.

also your interpretation of his primaries bottoming out to zero would be completely incorrect as all of your incorrect assumptions about his device.

assuming will get you no where fast.

seems a little research might be a wise idea before spouting conjectures.

Yes, I have made some assumptions and I thank you for that observation.  I guess we should agree to disagree amicably.

I think I created some confusion re my reference to the Figuera device too.  It was only the magnetic circuit, rather than the entire device that I was referring to and did not make that clear at the time.  You are certainly correct that the device as a whole is a generator.

The really funny part is i don't have to type nothing on my key board to know the difference between a transformer and a generator. now your sounding like Bistander on EF or Cifta on OU.

Again all your assumption are incorrect so i will leave you with them.

I don't assume I know so i will leave this misconstrued thread alone as you have all that hand waving down pat.

I think I have wandered off the thread almost entirely here, so I will try to back up a little.

What I was trying to achieve with the circuit shown above were two opposing secondary currents that were phased at 180° to each other.  I cannot say that Figuera employed any particular  arrangement, however in order to investigate the device thoroughly it was one avenue I wished to pursue.  The above circuit was initially only a means of achieving a simple power supply for that purpose.  It was only when I put a load between the coils that the voltage changed in one coil.  Prior to that everything was as one would expect.

The problem, as I see it, with the above wave forms is that this isn't supposed to happen.  If you see this circuit in operation, with the load between them, you observe two currents in opposite direction to the primary, which is quite normal.  However, one of them is of opposite voltage to both the primary, and the other secondary.

The question is, are the magnetic fields of the secondaries actually of opposite phase?  Voltage is considered work potential in electrical engineering.  It is the direction of the flow of charges, and their respective charge sign that tells one the direction of the associated magnetic field.  And the electron flow is the same in both coils.  This is not a trick question.  I am more than a little confused by this.  A scope shows the secondaries voltage opposite to each other, only when a load is attached. I've not seen a case personally where that did not amount to two opposing magnetic fields.

To me it is as though one coil has normal electron flow, and the other closely resembles 'hole' current in semiconductors.  I was hoping someone might be able to shed some further light on this.

Typically convention would state that each Secondary Coil no matter how many and how they are arranged, would be Equal in Ampere turns and Opposite in E.M.F to the Primary.

However, many of my experiments show this to be incorrect.

I can not comment directly on your experiment, as to the polarity of the Coils in respect to the others, its not my experiment and I do not have the empirical data to make such determination.

My rules of thumb are as I expect you already know:

More also, but I am only outlining the most basic.

Because the Electron possesses a Negative Charge, it also has a magnetic Moment, and because the binding Atomic Force is magnetic in nature, we possess the ability to Free more Electrons from Binding Forces allowing them to be subject to become part of the available Current Flow. Experiments here on our forum show this process already.

Basically we can Liberate and Accelerate Electrons using Magnetic Fields using Feed Forward and Feed Back techniques! A process the magnetron has been doing for over 100 Years.

Resonance means we can do this with almost no cost!

Our Future is going to be glorious!

Perhaps the image below might help answer my dilemma.  The circuit diagram above (Fig1) shows two secondaries of same winding direction with a load in series between them.  A scope shows them as being phased at 180° to each other.  But, are the magnetic fields produced by those secondary coils also of opposite phase?  No,  I don't think so.  And that is what I was looking for. 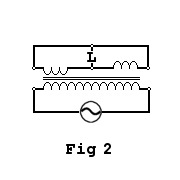 Some time ago I built a bucking field arrangement that created a situation of negative impedance at power on.  How that occurred exactly I still have not been able to ascertain.  My variac blew a fuse, in fact I blew a great many trying to get a handle on what was happening.  With that in mind I model my circuits now before building them.  If I do the math instead I will invariably get it wrong due to CFS and the confusion that develops along the way before I even realize it.  It's almost a certainty that I will accidentally reverse a variable's sign somewhere or other.

I believe you have answered your own question?

I believe I have.